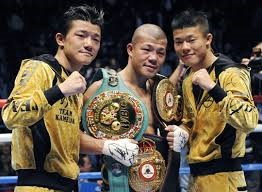 Boxers from Argentina have had their surge but it has slowed down considerably. Eastern European fighters continue to rise as Gennady Golovkin, Sergey Kovalev, Wladimir Klitschko, Vasyl Lomachenko, Ruslan Provodnikov, and Evgeny Gradovich and now Artur Beterbiev make great fights in different global locales. This surge may last for some time and even evolve into a new boxing landscape. But all of a sudden, Japanese prizefighters seem to be riding on the wave of an unprecedented fistic resurgence.

We, in Japan, will see at least eight world title bouts from now until the end of this year [2014]. All of them are so worth watching that our aficionados are now considering which to buy tickets of and which to watch on television…—Joe Koizumi

Like a samurai walking from city to city conquering souls for the Shogun with the sword, boxing will conquer the hearts of potential fans around the world with its hands.  God Bless Japan.—Troy Hines

Japan is no stranger to great boxing and a savvy fandom that continually packs Korakuen Hall with sellout crowds. Many of boxing’s premier smaller fighters are Japanese, albeit largely below the featherweight threshold.

This holds true for the past as well. Coming quickly to mind are warriors like Toshiaki Nishioka, Yoshio Shirai, Koichi Wajima, Masahiko “Fighting” Harada, Yoko “Fierce Eagle” Gushiken, Masamori “Chang Soo Hong” Tokuyama, Masao Ohba, Jiro Watanabe, Guts Ishimatsu, the Kobayashi brothers (Hiroshi and Royal), Kuniaki Shibata, and Shinji Takehara. There have been many others. Two—Gushiken and Ohba– have recently been inducted into the International Boxing Hall of Fame.

Two in particular have exploded onto the scene like meteorites. They are 21 year-old Naoya “Monster” Inoue (8-0) who has done remarkable and uncommon things in multiple weight divisions in just 2014, and Kazuto Ioka (16-1) who is a former unified Miniumweight champion holding the WBA and WBC titles and also a former WBA Light flyweight champion, therefore becoming a two-division World champion, Inoue’s recent dismantling of Argentina’s crafty Omar Narvaez may be a sign that the passing of the torch has begun in earnest.

Even in defeat, Hisashi Amagasa (28-5-2) gave Guillermo Rigondeaux a stern test on New Year’s Eve in Osaka, Japan dropping the undefeated Cuban twice before succumbing late in the fight. A far more fan-friendly Rigondeaux kept his belt in a “stay busy” contest most felt would be a mismatch. Amagasa proved otherwise.

While it is relatively rare for Japanese fighters to toil outside of their homeland, potential mega-fights involving Roman Gonzalez and other non-Japanese may force the issue. The thought—and hope– of a Gonzalez-Inoue face-off has the potential of affirming what every serious fan already knows to wit: the flyweight division is boxing’s most competitive division.