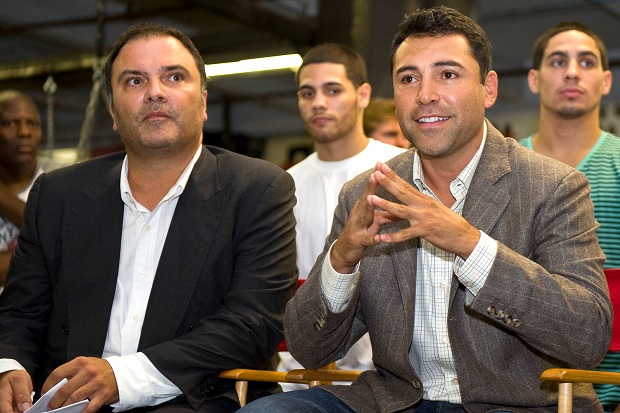 Saving both time and money, Oscar De la Hoya’s Golden Boy Promotions and their former CEO, Richard Shaefer, have come to terms on a settlement to the pending GBP multimillion dollar lawsuit for damages that would negate the necessity for a long, ugly court battle.

While financial details of the agreement were not released, an anonymous source, reportedly with first hand knowledge of the particulars, revealed on Friday that Schaefer will be unable to work in boxing for an undisclosed period of time. The inside source also told the media that the massive talent pool, apparently with conflicting and/or ambiguous ties to both Golden Boy and manager/advisor Al Haymon, would be divided according to whether each fighter had any sort of actual deal with Golden Boy in the first place.

In the split, De la Hoya will be allowed to maintain the services of Amir Khan, Lucas Matthysse, and Leo Santa Cruz for undisclosed periods of time.

The early, easy settling of the lawsuit allows for Golden Boy to keep pushing forward, rebuilding the ground lost during the days of De la Hoya’s drug excesses and Schaefer’s apparent coup attempt. It’s also a reasonable gamble that at least some of the talent recently lost may come back to them if Haymon’s essentially self-funded NBC deal should not run as smoothly as planned.

As for Shaefer, expect him to end up with Mayweather Promotions after his legally-imposed time away from boxing is over. By then, Mayweather may be out of the game and there will be an urgent need to build the company into something other than a Mayweather vanity company.

Nobody should’ve ever expected this lawsuit to actually get to court– few boxing lawsuits do, mostly because of the mutual danger involved in exposing the questionable dealings of all parties to the prying eyes of the discovery process. However, it would be nice to see a few of these reach the realm of real reporting. They would surely make for interesting insights into how the business of boxing is actually handled.

All in all, though, the quick settlement of this suit is probably best for all parties involved, including the fans, who will find at least one less layer of red tape blocking them from the fights they may want to see.