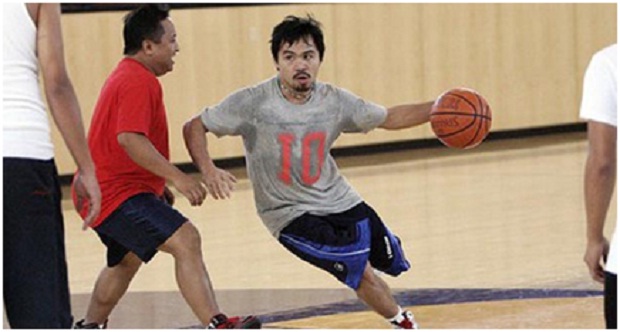 As the possibility of a boxing match between Floyd Mayweather and Manny Pacquiao gains traction, the issue of focus will become an important intangible.

The Mayweathers have their own family thing going what with Roger, Floyd Sr., Jeff, Floyd Jr., and mother Deborah Sinclair. For all their perceived dysfunctionalities, the clan appears to be relatively tranquil and is solidly fortified around the common interest of boxing with few other distractions. They have their own entourage but it is a close and loyal one that is seemingly kept in visual and fiscal check. Floyd Junior lives comfortably in the same city in which he works, trains in his own gym, and is protected at all times.

“Bobby’s [boxing] style is similar to his more successful big brother. For those of you who have never seen him fight, imagine Manny but with less speed, less power, less ability, and no killer left hook. What you get is Bobby Pacquiao.”—Jake Shaw (2008)

The free-swinging southpaw younger brother of Manny, Alberto Dapidran “Bobby” Pacquiao (alias the “The Sniper”) had his ups and downs during a career in which he went 31-15-3 between 1997 and 2008. Undoubtedly, Bobby will forever be remembered as “that other Pacquiao.”When he was good he was very good and when he was bad he was very bad. He did come to fight fair or foul. But in the end he lived up to his less-than-glorious reputation of someone who was too capable of blowing winnable bouts. However, before any tears are shed, it should be noted that Bobby was elected as councilor of the Labangal district in General Santos City.

“[Manny] Pacquiao’s rise to prominence has been largely marked by the worst in traditional politics. In the company of patrons, warlords and hangers-on, he took the trail blazed by those who invoke popularity as the sole qualification for public office.”— Philippine Daily Inquirer

The fact remains, however, that a Pacquiao family’s political dynasty in the Philippines has now emerged. Not only did Bobby win, but Bobby’s wife Lorelei was re-elected as chairman of the same district and another Pacquiao brother, Rogelio Pacquiao, was reelected as chairman of Apopong district. Of course, Manny Pacquiao is a congressman and his wife Jinkee is vice-governor of the Sarangani Province. Brother Rogelio Pacquiao is not new to barangay politics. He ran for congressman of South Cotabato in May 2013 but lost.

As for PacMom Dionesia Dapidran-Pacquiao (a celebrity in her own right), “after repeated denials, the 65-year-old mother of Manny Pacquiao finally admitted, that she is in a loving relationship with a man 25 years her junior, whom she identified only as Michael (later identified as Michael Yamson) who quashed rumors he is after her money. “Don’t worry, I’m going to announce to the whole world once I decide to get married again,” says the 65 year old Dionesia (AKA “Nanay Dionisia”) who was last seen blessing everybody in sight at her son’s recent slaughter of Chris Algieri in Macau.

Manny and his priorities

Manny seems to have left his wild ways behind him and has refocused on boxing and religion, but other pursuits continue to threaten the refocus.

“First, I praise God for giving me and my wife the courage and patience to overcome the problem brought about by the tax case. Second, I thank and I praise the Supreme Court for living up to its role as bulwark of justice and guardian of laws in this country,”— Manny Pacquiao

“He and his wife [Jinkee] are happier than ever. He doesn’t party any more, doesn’t drink anymore. He’s a clean liver, doesn’t fuck around with girls no more. And his wife is very happy about that. He’s a better family man. So there’s a lot of good that goes with it. He was a pretty wild guy, had the world by the balls. Everything was available.”— Freddie Roach

But as writer Mong Palatino asserts in the Diplomat (October 30, 2014),
“…Pacquiao should review his priorities. He is still a living hero to millions of Filipinos and fans around the world but he should question the wisdom of carrying too many identities and responsibilities. Pacquiao is not obliged to do everything his advisers and business consultants wanted him to accomplish. Right now …his constituents also expect him to fulfill his duties as public servant.”

Sports writer Jude Roque is more direct and states, “After pursuing careers as politician, [actor], TV host, recording artist and pastor among others, this new [basketball coach] ambition of his is just absolutely ridiculous. For him to play in the PBA is surely preposterous. For him to coach in the PBA is just as ludicrous. And for him to do both? [ It’s] outrageous!”

As for an entourage, Manny problem is that he is “generous to a fault” and that translates to a humongous, energy–draining bunch of leeches and hanger-ons. More importantly, It can also translate to dwindling assets. Says controversial Mike Koncz , “the downfall of Manny Pacquiao, if there is one, will be his kindness and generosity… at some point, I fear that’s going to catch up to him.”

Hopefully, Jinkee will help keep her husband’s squandering proclivities in check, but if she can’t maybe they can maintain their political careers—and maybe that’s why he has so many other interests.