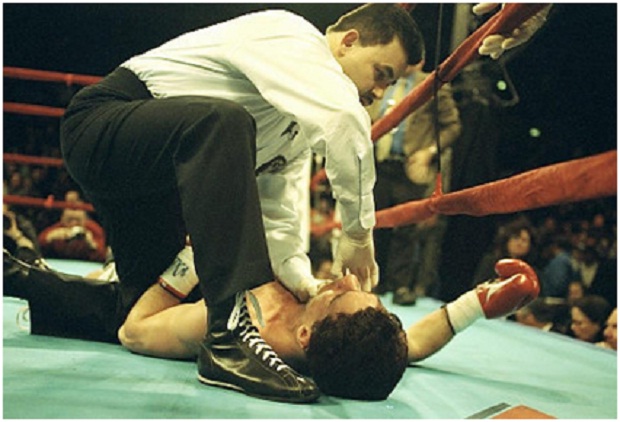 “I don’t know anybody outside of the Gatti camp who seriously maintains that Gatti made weight for that fight. They jumped him on and off the scale very quickly. It seemed pretty clear to me that someone at the commission had been told in advance that there might be a problem and the response was, ‘Don’t worry about it.'”—Thomas Hauser

In his last career fight on Feb. 26, 2000, Joey Gamache (55-4) was brutally knocked out in two rounds by Arturo Gatti (30-4 coming in) at Madison Square Garden. Gamache was the former WBA Super Featherweight, and WBA Lightweight Champion, but some alleged chicanery associated with the weigh-in had Gatti coming in at least 15 pounds heavier than the 5’6” Maine native. Some even say he came in over 160 for a 140 fight.

This was a classic New York City mugging with plenty of alleged shenanigans, a host of intriguing side stories, and a major law suit. The actual slaughter however, didn’t start until 1.10 was left in the first round when a Gatti right slammed Gamache down hard. Then, with 40 seconds remaining, a Gatti left hook put Joey down again. After a furious exchange, Joey now dazed and on Queer Street, was saved by the bell but the writing was on the wall as he slowly walked back to the wrong corner. The inevitable end in the second round was frightening to witness as Gatti visually measured his foe, positioned himself for full leverage, and cut loose. Here is the full fight: https://www.youtube.com/watch?v=PlaUfdxDiuY

Gamache nearly died in the hospital that night and sustained permanent brain damage from the nearly two rounds of action. Later, he filed a lawsuit alleging negligence by the NYSAC. He charged the weigh-in gave Gatti an unfair advantage in the fight, but that’s another story– though that story is a key part of the mugging in toto. Suffice it to say, the outcome of the law suit gave Joey a sense of redemption but shed little glory on the NYSAC. The following taken from http://www.fightnews.com/Boxing/gamache-wins-lawsuit-vs-nysac-42103 captures the poignancy of Joey’s redemption:

“Upon hearing the verdict Joey Gamache said, “I am truly gratified that we officially proved that we had alleged all along. The State was negligent, which they’ve denied for the last 10 years. They allowed for an unfair fight to take place. End of story. It’s never been about the money.”

“While we succeeded,” Gamache continued, “It’s troubling that negligence has been proven, with no punishment being given out. My hope is that my pain and suffering, might have some greater purpose. If it can effect change, so that fewer boxers are not unnecessarily endangered, then this was by far the greatest victory of my life.”

Gamache’s attorney Keith Sullivan said, “Joey’s reaction speaks to the integrity and honor of him, and laid out exactly what this case really meant to him. It was never about the money with Joey. And believe me, for most people it is. For 99.9% of them it is only about the money, I am proud of Joey for his bravery and courage to stay the course the past 10 years in this legal battle against the powerful NYS Athletic Commission. People will look at Joey as a former two-time World Champion and fighter who stood up to the NYS Athletic Commission. That’s going to be his legacy. He came out a champion once again.”