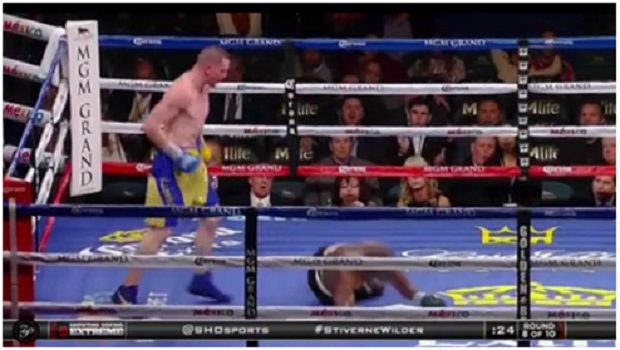 It wasn’t a particularly remarkable event and cruised under the radar for the most part. It was on the highly anticipated Stiverne–Wilder undercard. Heavy-handed cruiserweight Vyacheslav Shabranskyy (12-0) stopped overly game Garrett Wilson (13-8 coming in) via RTD after nine rounds. The Ukrainian, known as “Lion Heart,” lives and fights out of Los Angeles, while Wilson, known appropriately as the “Ultimate Warrior,” is from Philadelphia and took this one on short-notice as is his wont.

Well, Wilson lived up to his moniker as he took a brutal and unnecessary beating before referee Jay Nady finally called it off—something the ringside doctor (s) or Wilson’s corner could well have done much earlier.

There were two crunching knockdowns that bookmarked this bout. The first occurred in Round 2 and came as a result of an uppercut at the very last second of the round and also resulted in a delayed reaction as Wilson went backwards in the same manner as Frans Botha did against Mike Tyson. https://www.youtube.com/watch?v=rYSi-fAePl4

The very worse time to take a bad knockdown is at the end of a round because the next minute is often used up recuperating instead of getting instructions. Wilson’s glazed eyes should have signaled what was to come but he had a brave corner. In addition, Wilson is the kind of guy that has to be saved from himself and always does just enough to remain competitive.

The second knockdown—generated by a fully-leveraged and jarring right in round 8 resulted in Wilson falling face first—a dangerous way to land and one that should have ended matters. As he went down; he threw a harmless counterpunch which apparently some “writers” found amusing. A sampling of their sophomoric humor follows:

“Boxer Gets Hit So Hard He Does The Shmoney Dance (Video) http://bit.ly/1yrwKWU via @KelDansby”

“Garrett Wilson got hit so hard he thought the fight finished “About a week ago!”

“Garrett Wilson gets floored by Vyacheslav Shabranskyy in hilarious fashion.”

“What makes this even more hilarious was the fact that he tried to get that counter shot in, even though it had no chance of landing. Actually, tomorrow he probably won’t even have any memory of attempting that shot. But hey, he at least gave it his best shot.”

Here are the highlights of the fight: https://www.youtube.com/watch?v=nBHMw82aBkk

There was a story behind the story but most got their stories confused, but so much for missing the point. I can handle immaturity from clueless boxing groupies. What I can’t abide are ring doctor (s) who seem overly tentative about witnessing an accumulation of head shots to an overmatched fighter and the need to stop matters, notwithstanding that overmatched opponent’s courageous, albeit futile attempt to fight back. Nady ultimately did what the doctor should have done.

This begs the question, have we learned nothing from the Mago tragedy?