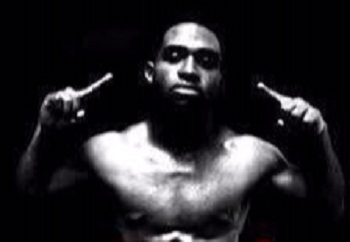 “For the stars and the stripes prison bars and the pipe
Young nigga rolling weed in a cigar he can light, bang red either blue selling hard and the white, live by the gun, never run from a fight, Trayvon in a hoodie, walking through the neighborhood he, didn’t do shit to buddy, he didn’t have to die did he?
I guess it’s because his dad was a judge in the city, they didn’t want him in the pen with the thugs that could get him

A jury of his peers said all was forgiven, but touch one of mine, right or wrong, I’m a kill them, fill them with the lead like they put in Martin Luther King’s head, like they killed Malcolm X, Edgar Hoover did that, you can catch me in the hood where they shooting niggas at, they don’t know if Neighborhood or the Hoovers did that, Whether Piru or VL’s or GDs with me we, Down to uprise from the OG’s to peewees”

Before Cooper was zipping up bodies in the ring, he was laying them to rest on the gridiron and hardwood. As a high school athlete, Cooper was a 3 sport star. His senior year, Cooper rushed for over 1900 yards, setting a school record for most rushing yards in a career at Seattle’s Kennedy High School, with 3,150. It earned him a nomination for All American honors. On the hardwood he was breaking ankles before jaws as the #8 scoring leader in the state.

What is even more impressive is that Copper is an educated young man. He holds a Bachelor degree in Criminal Justice with a Minor in Legal Studies. Why would Copper lace up a pair of gloves instead of a pair of Stacey Adams? Why wouldn’t Copper tie a Windsor knot instead of tying up on the inside? Simple, he’s a competitor. Under the watchful eye of Jeff Mayweather, Copper has been sharpening his skills at the Mayweather Boxing Club in Las Vegas, NV. The bright lights and fame of the gym owner doesn’t mean anything to Cooper though, “it’s just another ring to me to practice my skills at. I can perform in any ring, the doghouse, or joe blow’s gym in some shitty one horse town”.

As a Seattle, Washington native, Cooper draws inspiration from hometown superstars, Marshawn Lynch and Richard Sherman, “they’re amazing athletes. Lynch flat out just the plays the game with a passion unexplainable. On the other hand, no one competes or believes more in themself then Sherman”. It’s no wonder why Cooper has championship ambitions.

With as confident as Cooper is in himself, he is facing a similar roadblock most young prospects face, no promoter, “as a free agent, promises dates get cancelled, plus, you’re always coming in on the B side”. To a regular man, it would be a career killer, to a lion like Cooper, just motivation to stay in the gym, prepared for the phone call.

Life is simple to Cooper, “live life to the fullest”. When Copper isn’t in the gym perfecting his craft, he’s traveling, watching flicks and enjoying the time he spends with his his children. Plain and simple, Cooper just wants too fight, “8 fights, 8 wins in 2015.” With nothing on the horizon, promoters can contact Zach Cooper on Facebook or Twitter @IHATEZACHCOOPER for potential fights.