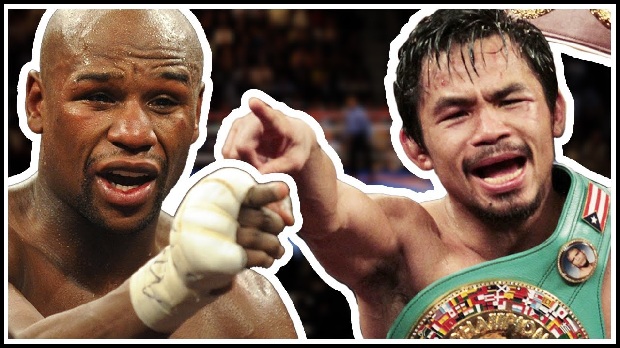 If you’ve been following all the recent Mayweather-Pacquiao drama, you’re probably perplexed as to what the hell is going on when it comes to the mega-fight.

Promoter Bob Arum started the year declaring Manny Pacquiao 100% on board and in agreement to all terms in super secret negotiations. All he needed was for that dastardly Floyd Mayweather to finally sign on the dotted line.

“Sign The Contract!” Team Pacquiao demanded. Pacquiao fans all over the world high-fived each other.

But then Showtime exec Stephen Espinoza said there was no contract to sign and that they weren’t even close to hammering out all the details of negotiations.

Then Mayweather met with Manny in Miami, first via courtside photo-op at a Miami Heat game and then in a private meeting back at Manny’s hotel. Mayweather fans all over the world let out a “Wassup, Manny? I thought Floyd was afraid!” in unison.

The world could now see that both Manny and Floyd wanted this fight (I guess). Pacquiao adviser Michael Koncz said that he was convinced Mayweather was genuine about his desire to make it happen and that only some small details needed to be worked out before a deal could be reached.

A deal was imminent, irresponsible websites posted, citing anonymous sources. “Maybe in the next couple of days,” Arum declared, adding fuel to the fire.

Mayweather issues a “stop lying about the fight being done” via social media from somewhere in the Caribbean.

Those “next couple of days” pass without a peep.

Michal Koncz decides that this is a good time to respect a gag order regarding negotiations. Shhhhhhh.

Fingers point at HBO, Pacquiao’s TV home, as the possible culprit in holding up negotiations. HBO issues the following statement: “We are not an impediment to this fight. We stand ready to go. The principals need to agree to terms and come to a deal.”

So, despite the most movement ever in Mayweather-Pacquiao talks, we wind up right where we began before this latest wave of rumors and reports ever began.

Mayweather and Pacquiao have not agreed to terms. The fight may or may not be close to done. And if you don’t feel like you’re being hoodwinked by one or more parties in this fiasco, you’re probably too dumb to realize when you’re being hustled in the first place.