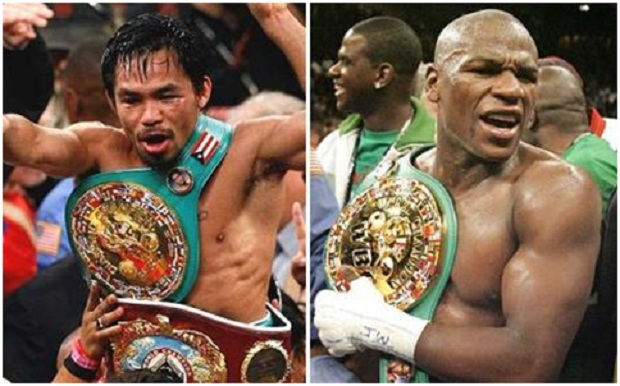 “That envelope has been pushed, stretched, torn, mangled, shredded, pulverized, burned, and exhausted into the upper stratosphere.”—Poster named TitoFan

“A FMJ vs. Pac fight in 2015 would be a dud. Floyd would put on his track shoes run & peck his way to a boring decision. Probably been more written about Floyd vs. Manny than the Kennedy assassination & the Manson murders combined”—Poster named Eric

“Getting all worked up over an 11-second clip is fine for those with a taste for crumbs. But if it’s a full course meal you’re after, you’ll have to look somewhere else.”—Robert Ecksel

“The fight will never happen in the sense that that fight is already gone, but this version of Mayweather-Pacquiao is still a huge event and yes, that can happen…I’ll put it this way, Mayweather will be favored and there will be good reason for that…you have to consider him the best fighter in the world…”—Max Kellerman

It’s gotten to the point where if I see either of their names (or Arum’s), I quickly move on without reading. Fact is, even if they fought, I sense it would no longer be a compelling boxing match. After all, how engaging would a fight be between a 36 year-old and a 38 year-old? Its true meaning has long since been lost.

Mayweather has looked off against Maidana and when he didn’t control the middle of the ring, he took a quasi-pounding against the ropes. Pac was sedated by Juan Manuel Martinez. Sure, he beat Rios and then whipped a rabbit in Macau, but he didn’t catch him and put him away. In this regard, Mayweather has not had a clean KO win since 2007, unless you count the Ortiz delayed-reaction waxing. Pacquiao’s last stoppage win came against Miguel Cotto in 2009.

What could have been an engaging action fight five years ago has now morphed into what could be a tactical(and numbing) chess match—one that would allow viewers plenty of time to go to the refrigerator.

What could have been tolerance for Bob Arum’s condescending remarks has now become intolerance for his annoying and confusing insistence on making public comments on the negotiations, despite an agreement to do so privately. Arum is apparently frustrated by the slow-rolling talks. “Nobody’s listening to anybody. I have no idea what’s going to happen,” said Bob. “I’ve never been through a situation as crazy as this. I’m tired of it. I’ve negotiated for 50 years and I’ve never been through some s-t like this.” To this I say, “so what?”

What could have been compelling has become tiresome.

What could have been “WOW” has become “Uh Huh.”

With fighters like Gonzalez, Froch, Golovkin, Klitschko, Rigondeaux, Kovalev, and Lomachenko, who needs a circus-for entertainment?