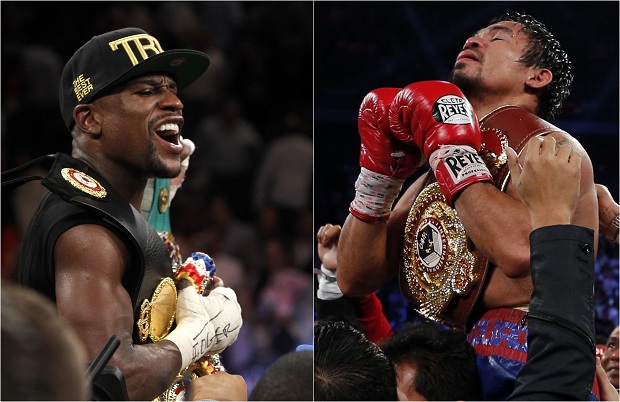 Well, it’s finally official! Mayweather vs. Pacquiao is on and set to (finally) take place May 2 at the MGM Grand in Las Vegas.

The news of the signed mega-bout was just announced by both fighters’ social media sites and confirmed through various media outlets. According to unconfirmed reports, the Mayweather-Pacquiao PPV will feature just three bouts (Mayweather vs. Pacquiao, at the welterweight limit,and one fight each from Top Rank and Mayweather Promotions). Not surprisingly, this event will also carry a heftier price tag than others, although no numbers have been mentioned. Also rumored to be in place is a rematch clause that could bring together a part 2 in November. Details regarding the event will be release via press release shortly.

The buzz for a Mayweather-Pacquiao pound-for-pound showdown began back in 2008 when Pacquiao brutalized Oscar De la Hoya in a welterweight bout, making the former pound-for-pound king quit on his stool. It was the first indication that the Filipino icon could excel above the lightweight limit and it indirectly put pressure on Mayweather, who was in the middle of a twenty-one month hiatus away from the ring, to affirm his place as top pound-for-pound star for this era.

On May 2 2009– the same day Pacquiao was set to fight Ricky Hatton in a junior welterweight bout– Mayweather would announce his return to the ring against Pacquiao arch-nemesis, Juan Manuel Marquez.

2009 ended with dominant victories for both fighters– Pacquiao over Miguel Cotto via TKO 12 and Mayweather over Marquez via shut-out unanimous decision– and the ball seemed to be rolling towards a Mayweather-Pacquiao clash.

By the end of the year, both sides were negotiating and both had come to terms on everything from purse split, venue, and even an arbitrary weight penalty for an over-the-weight-limit Mayweather, insisted upon by Team Pacquiao.

Talks, however, would stall and eventually collapse over Mayweather’s insistence that both parties undergo random blood and urine testing, above and beyond that indicated by the Nevada commission.

By early 2010, the issue had become such a bone of contention that an independent arbitrator was brought in to resolve the issue and work towards saving the fight.

But, by then, the mega-fight was a lost cause as both sides dug their heels in the sand, looking to save face in negotiations that had become painfully public. And, amid violation after violation of the arbitrator-imposed gag order– mostly by Pacquiao promoter Bob Arum– the whole effort collapsed, eventually turning into one, five-year-long he-said, he-said drama.

Shortly after talks collapsed, Pacquiao would file a lawsuit against Mayweather for defamation, related to Mayweather’s public statements claiming Pacquiao was using performance enhancing drugs. (The lawsuit would later be settled out of court for an undisclosed amount of money).

Both fighters would move on to take on other opposition and jockey for position as boxing’s number one draw and pound-for-pound kingpin– two distinctions Mayweather has earned over the course of the fighters’ five-year virtual feud.

Along the way, occasional rumors emerged regarding a return to the negotiating table with both sides agreeing that a bout between the two would be ideal, but neither really doing much to pursue it. At the same time, promoter Bob Arum would seize the opportunity to exploit the heated public emotion by floating out several unsubstantiated rumors to “friendly” media people regarding alleged efforts to make that mega-fight against a scared or indifferent Mayweather. On two separate occasions, Arum would even set deadlines for Mayweather to “sign the contract” despite it later being revealed that there was no contract to sign and that talks had not even reached the point were preliminary deals could be discussed.

Almost five years to the date of their first round of negotiations, though, serious talks between both parties had resumed, at least to some degree. Both Mayweather and Pacquiao publicly stated their goal to make the fight happen and even met in an impromptu face-to-face courtside photo-op at a Miami Heat game that would lead to an hour-long private meeting in Pacquiao’s hotel room later that evening.

But, now, after what looked to be an exhaustive, prolonged series of meetings to resolve a myriad of issues related to network, money, and the general logistics involved in pitting two superstars with different network alliances and sponsors against one another, the deal has been made.

All that remains now is the fight.