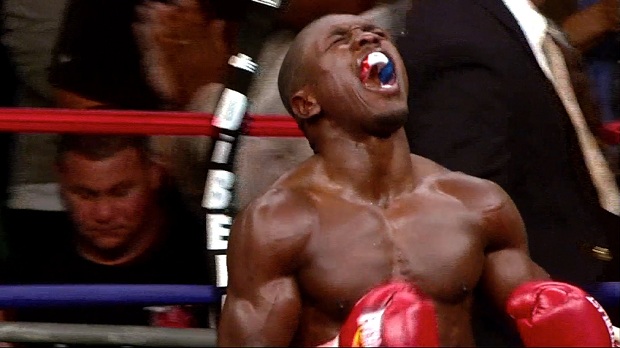 An evenly-fought bout up until the very last moments of the fight, Lopez was negating Berto’s obvious physical advantages with smart boxing and uncharacteristic patience.

Meanwhile, Berto was being Berto. The Florida native bounced in and out, looking for opportunities to land heavy leather and relying on his foot speed and reflexes to keep him out of trouble.

Berto-Lopez was an entertaining stalemate right up until Berto finally found the sweet spot in round six and dropped Lopez. Immediately after beating the count, Lopez was dropped again.

This time, the referee wouldn’t even give Lopez a chance to recover as the bout was waved off just as the “Riverside Rocky” hit the canvas.

Lopez, who was ahead on the scorecards at the time of the stoppage, seemed well enough to continue despite sporting an ugly abrasion that had formed over his right eye.

A 262.5 lb. Arreola made matters much more difficult for himself by entering the ring only five pounds shy of his heaviest ever. And the lack of conditioning likely made the difference between a first round KO victory and this tough, tiring eight-round affair.

In the very first round, Arreola dropped Harper and appeared to have him out on his feet. However, an out of steam Arreola couldn’t close the show.

The second round featured a Harper comeback against an Arreola who had clearly punched himself out in the first. The next several rounds, as a matter of fact, featured quite a few Harper moments as he hit Arreola often and managed to wobble the two-time former world title challenger on several occasions.

However, Harper, weighing four pounds more than Arreola, appeared to be just as out of shape as his opponent and couldn’t really present any sort of sustained offensive surge.

The entire bout was actually a back and forth affair between two men forty pounds over their ideal weight, but putting forth a supreme effort under the TV lights.