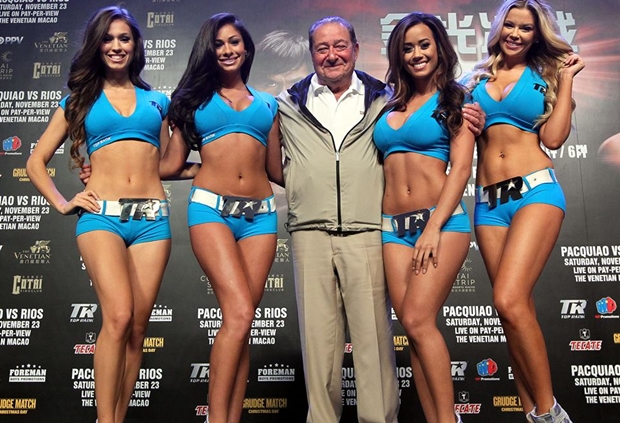 Promoter Bob Arum is quick to point the finger at the incompetent boxing media as the villains in this five-year Mayweather-Pacquiao fight-stalling fiasco.

Of course, he’s pointing the finger now and not before the official mega-fight signing when members of his own Top Rank team, and even his own son-in-law, were puzzled by his extreme belligerence in actually putting this deal together.

Now, in the after-the-fact world he’s allowed to live in by a hand-fed, dim-witted press corps, he sits back and waxes philosophical about the real hold-up to the biggest money fight of all time.

“The quality of journalism today is not what it used to be,” Arum told Boxingscene’s Lyle Fitzsimmons during a cozy phone chat last week. “There’s a lot of gotcha journalism. It depends on how a question is asked, how the answer will be. I think that with a lot of this, the press prodded Floyd into castigating me personally when I don’t think he really believed it, or that he would have said it if the question had been asked differently.”

Well, apparently, that seals it in Fitzsimmons’ mind. Case closed. Fitzsimmons would go on to refer to those reporters who chose to explore the Arum vs. Mayweather acrimony as “agenda-wielding” and the “smartest guys in the room” with “The attitudes to match.”

And all it took to convince Fitzsimmons of this was one personal phone call from Arum, the guy who was in the thick of the controversy and the one who would benefit most from the record being wiped completely clean ala Magic Slate.

This isn’t the first time since the mega-fight’s signing that Arum has lashed out at the media for, presumably, lacking the brains and balls to reject what he’s been feeding it. But as is usually the case, nobody dares call him out on the weird logic involved in blaming the beast he helped create.

With the fight on for May 2 and the mainstream world looking to hero-worship everyone involved, Arum is itching to get out in front of the cameras and claim as much glory as possible.

Arum is the runaway bride laughing it up at the reception, taking photos and eating handfuls of wedding cake, wanting to make the world forget all the times she bolted from the altar.

In the repainted, reconfigured world of Bob Arum, he and Floyd Mayweather are kinda, sorta pals. Forget everything that the aged promoter has said about his former fighter since Mayweather broke free from Top Rank more than nine years ago. Forget the name calling and spiteful attempts to destroy Floyd’s reputation and legacy– it was all the media’s fault for inventing a hateful rivalry that was simply not there.

To Fitzsimmons, Arum described his relationship with Mayweather as “extraordinarily cordial”– a far cry from his stance when he was calling Mayweather a “chicken” for not signing his name to what turned out to be a non-existent contract just this January.

And it must’ve been pure media fabrication back in December of 2009 when Arum nailed the first nail in the Mayweather-Pacquiao coffin by saying: “who is this ignorant, illiterate kid demanding this [drug testing]. Who is he?” and “This whole issue has been brought up by a completely illiterate idiot, Floyd Mayweather Sr. — the father of a kid who doesn’t want to get into the ring with Manny Pacquiao.”

How about referring to Mayweather adviser Al Haymon as a “sleazebag” and a “Machiavellian SOB?”

How about the five years worth of conveniently “incorrect” information and half-baked rumors floated to the media for mass distribution? Or the fake deadlines, phantom contracts, and fictitious negotiations conducted with empty chairs? Must be pure media distortion.

Keep in mind that, by pointing this finger at Arum, I am in no way excusing Mayweather for his sins in this debacle. Some seem to not be able to understand that.

By focusing on Arum, I’m sharing an angle that has been intentionally silenced in the inept mess that makes up our mainstream boxing media. The “Mayweather is a coward and had been avoiding the Pacquiao fight” angle is widely reported and shared in the media.

True, Mayweather’s arrogance and indifference definitely played its role in blocking the “big one.” But, again, that angle has been flushed out and posted hundreds of times over the years and in the social media accounts of the “big time” boxing media people. The other side of the coin, however, rarely gets any play. By nature, I’m an “other side of the coin” guy.

Actually, though, Arum is right about blaming the media for much of this mess. But the fault isn’t in overly ambitious “gotcha” journalism or “agenda-wielding” troublemakers. The media’s sin is in allowing Arum to lead them around by the nose when they know his character and his genius-level fiction-weaving talents. Remember, this is the guy who said “Yesterday, I was lying. Today, I’m telling the truth” and the more telling, “They [the fans] can go fuck themselves.”

The optimist assumes that these media types are just not very bright, maybe a little star-struck at having a one-on-one chat with a heavy-hitter like Arum, and easily led into printing, unopposed, anything Arum cares to dictate. The pessimist, however, thinks that many of these media-types do know better and are willing to give the powerful Arum free reign in exchange for future considerations. I’ll never know because I’ll never be allowed mainstream access to the masses or to the sport’s power brokers.

Either way, Arum gets away with painting the narrative of everything he touches and re-writing history according to his whims when his initial plans fall apart.

If there is a greater testament to the need for reform in both the sport and its media, I don’t know what it would be.