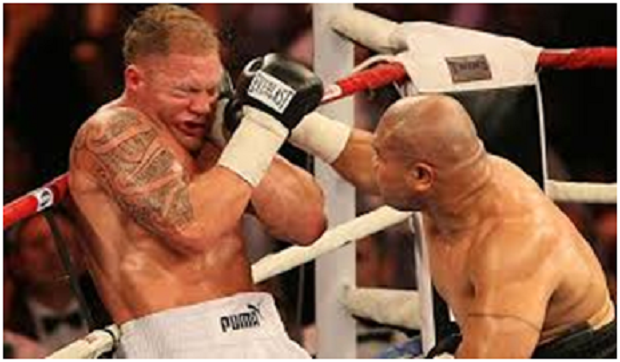 “I know Shane Cameron has been banging the drum and wants to get it on with David, but from David’s perspective, Shane is still on his way up the ladder and at the moment a fight between them would be of more benefit to Shane than David.”—Tua’s advisor Inga Tuigamala

“We’d fight Tua in a heartbeat, but you can see why Tua doesn’t want to fight him.”— Cameron’s manager Ken Reinsfield

This highly anticipated one took place in New Zealand and was dubbed “The Fight of the Century” by the promoters, but the fight turned out to be a quick slaughter. It really ended in the first round as the short and powerful Samoan (who was in tip top shape) went right after the New Zealander (23-1) and put him “down under” twice with his signature left hook. Tua then hit the “Mountain Warrior” twice while he was down but esteemed Referee Bruce McTavish seemed confused by what was going on. Apparently, due to an “adjudicating” error, Cameron was not counted out and survived the round.

The confusion simply prolonged matters because seconds into the second round, Tua quickly backed up a still groggy Cameron onto the ropes and threw 20 crunching shots most of which landed cleanly on Cameron’s head. McTavish apparently had been mesmerized by an aroused David’s power because he should have stopped the sudden and sustained assault far earlier. Here it is and be forewarned, it’s frightening: https://www.youtube.com/watch?v=0IweZbGWpMc

In a twist of fate, a fading Tua would subsequently draw and lose to Monte Barrett in 2010 and 2011. However, Cameron knocked out Barrett in July 2012 with an overhand right that was as scary a knockout as one could ever witness. The force of the punch was doubled as Cameron was coming and met Monte who also was coming in. With the win, Cameron pretty much redeemed his loss to Tua. Here it is: https://www.youtube.com/watch?v=3BrGfuCd-LI