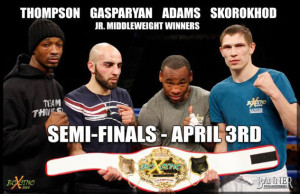 Three fights may have gone chalk, but the fourth one was one huge upset as the ESPN2 Friday Night Fights Boxcino tournament semifinals went down at the Sands Casino Ballroom in Bethlehem, Pennsylvania. In the heavyweight division, Andrey Fedosov (27-3, 22 KOs) stopped Lenroy Thomas (19-4, 9 KOs) and Donovan Dennis (12-1, 10 KOs) utterly flattened Razvan Cojanu (13-2, 7 KOs) with a left hand followed in flow by a shoulder check worthy of the NHL. Meanwhile, at junior middleweight, John Thompson IV (16-1, 5 KOs) took advantage of a dreadful performance from Stanyslav Skorokhod (9-1, 7 KOs) to sneak a split decision out on the cards and ensure himself a place in the Boxcino final on the very last episode of FNF, coming in May.

The heavyweights did not leave much for analysis. They did, however, provide a great wrinkle for the final bout. Andrey Fedosov acted like he’d never seen a southpaw before when he fought Lenroy Thomas, and Thomas was able to confound the Russian, even scoring a knockdown in the first round on a blinding jab that set up a honey of a straight left that caught Fedosov right on the chin and sent him back and onto his rear end for a count.

Shooting a bear with a .22 will only make it angry, however, and Fedosov did the best thing a power punching orthodox fighter can do to a southpaw. Specifically, Fedosov started bull rushing Thomas, whose tendency was to get square when he got too close to the ropes. Considering that giving angles was the Jamaican’s clearest hope for victory, this proved devastating, and Fedosov, freed of the unfamiliar sight of the southpaw stance in front of him, was able to fire at will.

All that teeing off eventually bore fruit as a shot to the body at 1:01 of the third round folded Lenroy Thomas in half and caused him to take the ten count on one knee—the comeback and knockout were complete for the Russian, who punches his ticket to the final.

His opponent? Well, what have we here…another southpaw. Donovan Dennis didn’t need to be slick or clever, not with his Romanian opponent in Razvan Cojanu drawing comparisons to Boris Karloff in The Mummy (1932) from Teddy Atlas. Cojanu was slow, he was stationary, his footwork was terrible, his defense worse, and Dennis went to town on him, smacking him around from every angle before finally landing a monster straight left hand underneath a very lazy overhand right that left Cojanu’s chin wide open. Cojanu couldn’t have been easier to hit if he’d just stuck his chin out and pointed at it while saying “hit me.” Donovan Dennis obliged, and Cojanu was out like a snuffed candle.

So take a southpaw with power against a guy previously thought to be the overwhelming favorite and what do you get? A suddenly must-see Boxcino heavyweight final, that’s what.

Down at junior middleweight, we’ll take on the second fight first. Brandon Adams closed the show in two ways—one, he was the last fighter of the night along with Vito Gasparyan and two, he caused a swelling of Gasparyan’s ear so nasty that even Mike Tyson wouldn’t want a bite of that.

The fight itself was dominance in brutal inside phone booth fighting fashion. Gasparyan needed to outbox his opponent to have any chance of winning and instead ended up eating a varied diet of uppercuts, straight body shots, and looping hooks around the guard when he abandoned punching position to keep his guard up. It was that last that proved the killer, though—Adams was able to land a bunch of shots right on the actual tissue of the outer ear, creating first a mouse, then a rat, then a Hasim Rahman of a hematoma…and if you’ve ever had a pimple in your ear and known how much one of those hurts when it swells up, well, just imagine that…in your whole ear.

Finally, in round six, Gasparyan could take no more—the pain was so extreme that he had a “no mas” moment, and props to ESPN’s camera guys for catching the “oh my God” reaction shot from Brandon Adams when he finally saw up close what his work hath wrought upon a man he considers a friend. That was as ugly a swelling as we’ve seen on Friday Night Fights since Pawel Wolak. The end result was a TKO victory and a spot in the junior middleweight final for Brandon Adams.

In the other fight, Stanyslav Skorokhod experienced a critical strategic failure at the worst possible time. The style he chose, fighting at his opponent’s range, throwing one shot at a time, and failing to press his advantage on the inside, seemed calculated to make John Thompson look like Floyd Mayweather. We saw Thompson’s weakness in this fight. He can’t handle the pace of a fight when it gets to a frenetic level, like an NBA rookie moving up from the college game and blowing defensive assignments because the speed of the game is just on another level.

Had Skorokhod realized that a “zerg rush” is the best way to beat John Thompson, he’d have bull-rushed his way in, with or without the jab as a range finder, then he would have backed up Thompson onto the ropes and gone to town, a lot like Andrey Fedosov figured out to do with his opponent earlier in the night. Thompson can be overwhelmed when he gets swarmed—something Brandon Adams surely noticed—but Skorokhod and his people didn’t suss out the opportunity and thus kept continually getting outboxed throughout eight rounds.

That’s not to say the fight was a total washout—the reason Thompson’s weakness was so evident is precisely because Skorokhod had his moments in this fight when he came forward and engaged, and Thompson never seemed to have a reply when the Ukrainian wasn’t simply walking into counters. The problem was that Skorokhod couldn’t do this consistently, and that’s what doomed him.

The judges had it 77-75, 74-78, 78-74 for Thompson. Your columnist and Teddy Atlas both had it 77-75, and frankly whoever thought Skorokhod won six rounds needs a cab called for them and an admonition of “go home, you’re drunk” given them by the bartender, because there is no way in hell John Thompson only won two rounds. Still, the right guy won in the end, and instead of a puncher vs. a boxer, we get a slick counter-puncher against a guy who wants to work inside and do damage with short shots. Will Thompson be able to outbox and frustrate Brandon Adams, or does Adams have the ring smarts not to get tied up on the inside and not to get potshotted to excess while closing distance? We’ll find out May 22.

Next week, ESPN2 travels to the Mohegan Sun Casino in Uncasville, Connecticut, where Tony Harrison (20-0, 17 KOs), last seen putting Antwone Smith to the sword on FNF five weeks ago, takes on journeyman welterweight Pablo Munguia (20-6, 11 KOs) in what should, on paper, be a showcase squash, but as John Thompson has taught us twice now in Boxcino, just because a guy’s an underdog does not make him a no-hoper. The Boxing Tribune will have full coverage of FNF fight week with the preview and recap. Stay tuned—we’re the worldwide leader in covering the Worldwide Leader.

Fox Doucette covers Friday Night Fights for The Boxing Tribune and writes the weekly What If alt-history series for this publication. Today is a milestone day—four years ago, April 10, 2011, his very first article hit the Trib, a piece about David Lemieux and Marco Antonio Rubio after the latter’s TKO of the former on ESPN2. Thanks to all the fans who have been reading over the years. Fan mail, hate mail, and thoughts on whatever happened to David Lemieux as a serious player in the sport can be sent to beatcap@gmail.com.