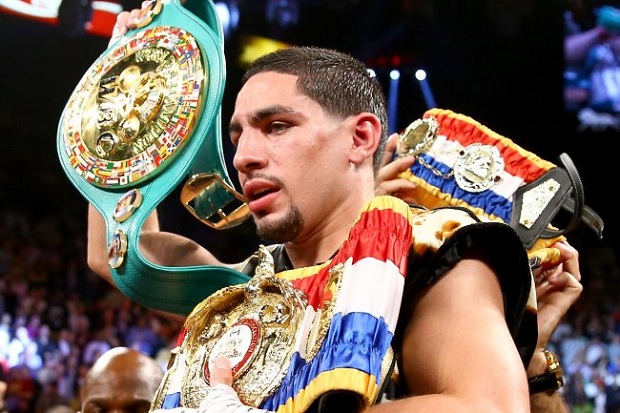 Barclays Center, Brooklyn, New York– If Lamont Peterson (33-3-1, 17 KOs) hadn’t waited so long to show his offense against Danny Garcia (30-0, 17 KOs) on NBC’s Premier Boxing Champions, he wouldn’t have had to settle for a close majority loss Saturday night.

Peterson gave away the first half of the fight by moving and moving with no intention of actually punching while Garcia piled up rounds by simply pursuing and throwing grazing shots.

The tragedy for Peterson was that once he actually came forward to exchange shots with Garcia, he had the clear edge in almost every exchange, busting up his opponent around the right eye and sweeping the final five rounds of the bout.

It was simply a case of too little, too late for Peterson as the judges scorecards of 114-114 and two 115-113 scores for Garcia proved. The Boxing Tribune also scored the fight 115-113 for Garcia in a contest where the loser won all of the late rounds and did the most physical damage, but lost via poor tactical decisions.

For a time, this bout was in question due to Quillin’s inability to make the 160 lb. middleweight limit yesterday and his excessive weight gain in the time between that weigh-in and this morning’s second weigh-in. But with NBC on board and big money at stake, Team Lee was paid a hefty sum to look the other way and face Quillin without his WBO middleweight title on the line

As for the fight– Two early knockdowns by Quillin, in rounds one and three, put Lee on defense early in the bout. And Quillin, despite charging ahead to an early lead, also seemed frozen on defense for good portions of the bout due to some near misses and a visit to the canvas in round seven.

So, what we had Saturday night was two cautious fighters occasionally throwing bombs, but very conscious of the other’s power. This dynamic made for some long stretches of jockeying for position setting up occasional bursts of heavy-handed action. One gets the feeling that, especially in the case of Quillin early in the bout, a more aggressive approach would’ve made the difference between a win and a draw.

As it was, though, Lee-Quillin was a nice little bout that The Boxing Tribune scored 115-110 for Quillin, but one certainly worthy of a part two.