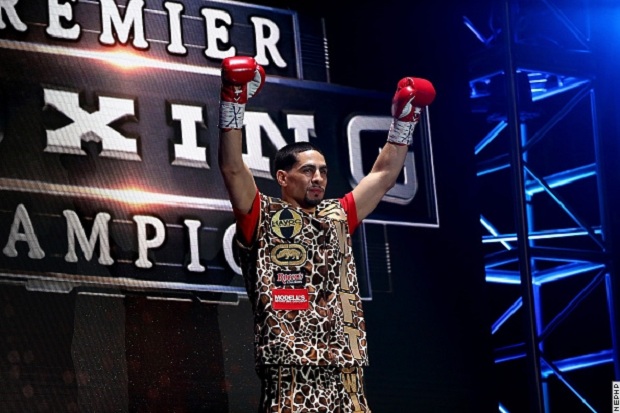 We’re a little over one month into the Premier Boxing Champions movement and things are going fairly well…right now.

So far, with the exception of a so-so Adonis Stevenson-Sakio Bika Quebec main event and a dreary Broner-Molina undercard feature on the Vegas debut show, the actual quality of the boxing has been pretty good.

The production values and overall presentation are being tweaked over time and getting better with each show.

Ratings have been good as well– except for the aforementioned Stevenson-Bika main event, which peaked at 1.3 million viewers that Saturday afternoon. It was a predictable fail with an afternoon card showcasing two foreign fighters in predictable squashes. Hopefully, like in the case of the broadcast look and feel, this will serve as a lesson for future tweaking. (UPDATE: Overnight ratings for last Saturday’s Peterson-Garcia card show a significant dip in overall viewership from the March 7 NBC debut).

I’m not even all that concerned about the long term economic viability of the PBC project. Haymon is a shrewd, calculating businessman and obviously has a long-term plan in place that, even if it fails, will only result in boxing going back to its 2013 business model.

The real problem with Premier Boxing Champions, however, may have to do with the long-term viability of its talent.

If Saturday’s show from the Barclays Center showed us anything, it’s that Haymon and Company’s top tier talent is very vulnerable.

Danny Garcia showed his defensive liabilities and his growing complacency. Lamont Peterson, in throwing away the first half of a fight he should’ve won easily, showed us why he has never been able to get to the absolute top. Peter Quillin showed us the awkward punching power that took him to a world title, but also the mental and physical vulnerabilities that keep him far away from achieving top middleweight status.

Actually, look up and down Haymon’s huge roster and you will see plenty of big talents with big liabilities and vulnerabilities.

Adonis Stevenson is a strong, athletic southpaw with a huge left hand. And that’s all he has needed to be so far. But opponents are figuring him out and a general disregard for change coming from Stevenson will keep him from adding dimensions to a style that has taken him to the lineal light heavyweight title. In his last three title defense, he has not looked as hungry or as impressive as he used to be before the money and fame came rolling in. If he faces qualified opposition, he will be beaten sooner rather than later.

Keith Thurman’s standing as the “next big thing” is tenuous at best. He has definitely improved over the last couple of years, but there’s still plenty that he needs to work out, both technically and tactically.

Adrien Broner is (another) marquee loss waiting to happen.

Leo Santa Cruz and Abner Mares will put on a good show when they eventually meet, but neither is a real draw and, most importantly, neither is Guillermo Rigondeaux.

Julio Cesar Chavez Jr. has underrated ability and instincts, plus the greatest legitimate drawing power of any Haymon fighter (other than Mayweather), but he’s a man-boy who can– and will– upset the whole applecart whenever he feels like being the spoiled rich kid that he is.

And all of the rest of Haymon’s prime talent– Alexander, Berto, Porter, Trout, Lara, Russell, Arreola, Figueroa, Dirrell, etc.– is plagued by inconsistent performances and/or poor drawing power. On paper, it is indeed an impressive roster of talent and, yes, some of the younger prospects have yet to really show what they can do, but there’s reason for legitimate concern a little bit down the line.

How do you build a roster of national stars when the prime prospects for stardom are so vulnerable to defeat and/or piss-poor outings?

Nobody within the PBC brain trust wanted Lamont Peterson and Andy Lee to emerge victorious last Saturday night, but they almost did. What if Robert Guerrero had beaten PBC darling Keith Thurman? It was definitely a distinct possibility. Arreola fought sloppy and was almost taken out by a club fighter in his fight on Spike TV. Broner still fights rattled, with visions of Marcos Maidana in his head. And, speaking of Maidana, what do you do with a Haymon fighter who could conceivably beat Thurman, Shawn Porter, or any of the other Haymon welterweight properties? The stoic, heavy-handed Argentine is hardly a crossover star to warm the hearts of a mainstream American audience.

It would appear that Haymon has two ways to go with his PBC product– Keep his matchmaking competitive and allow the chips to fall where they may or manufacture the rise of his most marketable stars with soft touches. Neither choice, however, is conducive to achieving the goals he has set out to achieve for his brand. Soon, it’ll either come down to leaving everything to chance and book quality bouts at the possible expense of creating true stars or taint the entire project with squashes that will keep audiences from embracing the brand.

This dilemma is best illustrated by Haymon’s tight spot in the Adonis Stevenson situation.

For Stevenson, there is only one fight to make– Sergey Kovalev. Anyone who knows anything at all about the sport knows this to be true. Anything less than Kovalev will bring ruin to Stevenson’s reputation. Yet mainstream sports fans– the main target of PBC’s push– probably have no idea who either guy is.

So, do you risk it all by pitting your fighter against an “outsider” to stay in the good graces of the boxing community or do you ignore Kovalev, alienate fans forever, and set about the arduous (and likely fruitless) task of trying to fool the non-boxing public into thinking that Stevenson rules the roost unopposed?

These are the types of decisions that will need to be made, across the board, in the very near future by Haymon and his people.

Another related issue is whether their home-brand stars can claim superiority and dominance without bringing Pacquiao, Kovalev, Canelo, Cotto, Klitschko, Golovkin, Rigondeaux, and Crawford into the mix. How far do they plan on going before either squaring off against non-Haymon elites or dedicating themselves to pretend ignorance of the non-PBC world?

There are just so many in-house matches that can be made before the talent roster is exhausted and fans become bored. PBC is fine right now, for the most part, but what about a year or two down the line?

It’s becoming clear that Thurman, Garcia, Stevenson, and Broner were not the best choices when looking to create a rock-solid foundation for an entire boxing brand. It remains to be seen whether that oversight was a problem related to talent scouting in the very beginning or en masse under-performance by jaded young athletes making superstar money before establishing a superstar body of work. The one proven and consistent asset Haymon does have, Floyd Mayweather, is halfway out the boxing door and seems generally disinterested in the PBC product.

At some point a decision will have to be made whether Haymon will open PBC to non-Haymon fighters and have his guys earn stardom at great risk or go the “in house” route until there’s nowhere to go. Either way, the idea of creating a band of superstar champions to carry the PBC to great success is a long-shot proposition. It’s no guarantee that angry promoters like Top Rank, Main Events, and Golden Boy will even be open to working with Haymon after years worth of talent grabbing and bridge burning.

Some of the PBC fighters will have to step up and somehow grow into true stars or Haymon will have no choice but to open up and share the market presence he so aggressively fought to create.

If anything is going to bring down the Haymon Empire and ruin the PBC concept, it’ll be a failure of either to happen.

For compliments, death threats, and fake job offers, you can email Paul at paulmagno@theboxingtribune.com . You can also buy his book, Notes from the Boxing Underground! Paul is a full member of the Burger King Kids’ Club, a born iconoclast, and an ordained minister in the Universal Life Church.