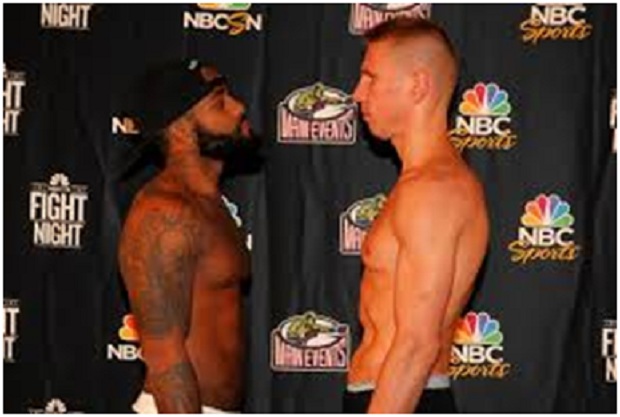 When a documented mugger with a crunching left hook meets a bone dry opponent just coming off a loss in another country (to Denmark’s Patrick Nielsen) and the properly warmed up mugger needs to make a comeback statement after having tasted the leather of GGG, circumstances are ripe for legal assault and battery.

In 2013, Curtiss Stevens perpetrated such battery on Saul Roman in the first round and did the same with tough Elvin Ayala earlier in the same year. Both beatings took place at Mohegan Sun Casino in Connecticut. Many of Showtime’s stoppages have come in a matter of seconds and his booming left hook makes him dangerous until the very last second of the last round as Tureano Johnson found out in April 2014.

This time, Majewski (21-2 coming in) entered the Atlantic City ring looking tentative and like someone who was in the wrong place at the wrong time. Stevens, from Brownsville, NY, looked like he belonged.

After three knockdowns in just 46 seconds, Stevens emerged the winner while the Pole from Random, Poland remained stunned and bewildered. The first knockdown occurred as a result of a jab. The others came from Stevens’ hooks though they were not as lethal as usual. Now forty six seconds is hardly enough time for a seasoned mugger to do his damage—even in Chicago’s Grant Park or New York’s Central Park, but if there is no resistance it can be quick. Here it is: https://www.youtube.com/watch?v=laiw6F06gQA.