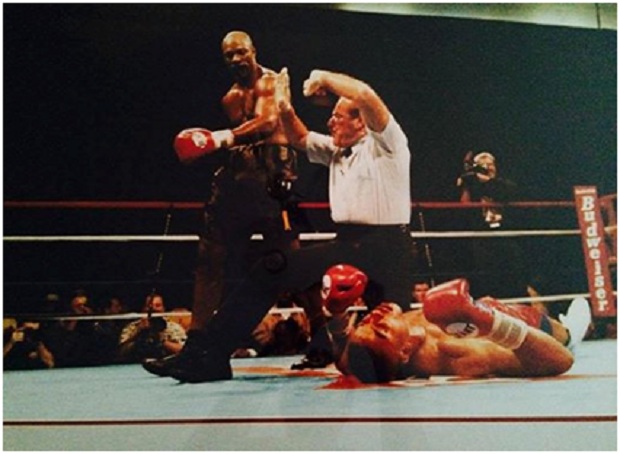 When boxing fans think of the most spectacular knockout they have ever seen, the Vonda Ward vs. Ann Wolfe fight is likely to get mentioned most often. That fight occurred on May 8, 2004 in Biloxi, Miss.

At stake were the vacant IBA female light heavyweight title and the Women’s International Boxing Association World light-heavyweight title. In short, it was an important matchup between two very tough fighters one of whom (Ward) stood 6’6.

At the one minute and eight second mark of the first round lightning struck when Wolfe (16-1) knocked out Ward (18-0) with a devastating right to the chin-made even more destructive because Ward inadvertently jumped forward squarely into the impact of the fully-leveraged punch-leaving her (Ward) unconscious. This first round knockout defeat caused her to lose both her title and her undefeated status. Ward also suffered a neck concussion because she hit the canvas with her neck when she fell and she was then hospitalized afterwards. Amazingly, however, she came back to win her final five fights and finished her career with an outstanding 23-1 mark.

Here is the fight: https://www.youtube.com/watch?v=1h-hmcnlmrQ

But wait just one minute. I remember one that just might trump the aforementioned and almost resulted in a decapitation.

It occurred in the sixth round of the Derrick “D-Train” Jefferson vs. Maurice “Mo Bettah” Harris forgotten classic that took place in November 1999.

The towering and athletic Jefferson, 6”6, turned pro in 1995 after a celebrated amateur career and went 21-0-1 in his first 22 bouts, 17 by KO. His appetite for brawling made him a crowd favorite.

Maurice Harris took a different route into boxing and had but a handful of amateur bouts before turning pro at 16. He too was tall at 6″4. Unlike Jefferson, however, Mo went 7-8-2 in his first 17 bouts but he improved on the job and would go on a very successful run from 1997-1999, winning nine out of ten bouts, including big wins over James Thunder and Jeremy Williams.

Boxing writer Steve Gallegos described the second round as follows: “… Jefferson put Harris down with a sensational left hook. Jefferson would go on the attack and would put Harris on the canvas again; however Harris would get up and turn the tide only seconds later as he dropped Jefferson with a right hand. The round would end with both men slugging it out on the ropes. Larry Merchant of HBO called that round the best round of Heavyweight boxing probably since Bowe vs. Holyfield.” (The Title Fight, May 7, 2014)

But the best was yet to come.

The next two rounds and most of the sixth were back and forth affairs with both men appearing to be winded, yet both traded bombs with Jefferson seeming to get the better of it. Then in the fateful sixth, Jefferson, much bigger at 246 pounds, honed in on Harris’s 211 pound body and put him down hard. But as was the case in the first round, Harris came back and staggered Jefferson in what was becoming still another great round to a great fight. Then, at the 2.52 mark, it happened. While Harris was rallying, Jefferson launched a deadly left hook that dropped the game Harris like he had been hit with a heavy iron ball. As Harris went down, his mouthpiece flew into the crowd and his eyes glazed over. No count was necessary by Steve Smoger but first aid was. The KO was voted as Ring Magazine’s Knockout of 1999. Here are the highlights of the fight including, of course, the scary ending: https://www.youtube.com/watch?v=z81taPNIkw8

Harris came back to win some and lose some against a Who‘s Who of boxers and is still fighting but he has never been the same. I always wondered what would have become of his career had he not lost to Larry Holmes in 1997 in what could only be called—and I’m being polite– a politically correct SD decision at Madison Square Garden.

The brawl also took its toll on Jefferson as he lost 3 of his next 4 by TKO against top-tier opposition, After being mauled by Wladimir Klitschko in two rounds in March 2001, he went on a 5-fight win streak but was stopped by DaVarryl Williamson in 2005 in Jefferson’s last fight. His final tally was a very respectful 28-4-1