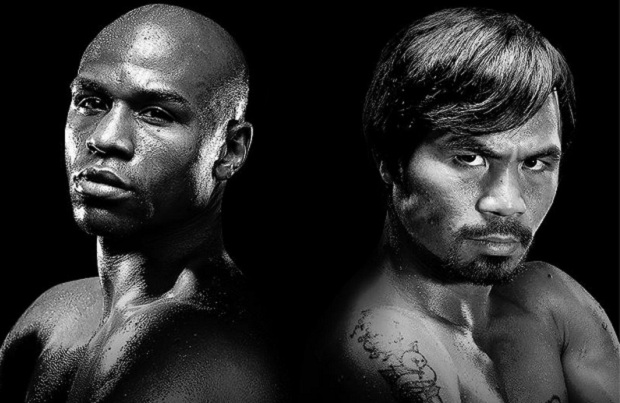 The big fight is less than two weeks away and the serially disgruntled are already well into fight week form. In some company, it’s almost as though you risk being seen as a pacifier-sucking half-wit if you actually admit that you’re looking forward to Mayweather-Pacquiao.

They had been touting Provodnikov-Matthysse as the REAL fight to watch during this two-week stretch. Even a couple of the Tribune’s own staffers are on that “Forget May-Pac, there’s Provo-Lucas” kick and it’s understandable.

In terms of action, last Saturday’s battle is sure to surpass Mayweather-Pacquiao in sheer chest-pounding, manly violence.

But, no matter how good it was (and it was a bit of a letdown after all the FOY expectations) Provodnikov-Matthysse was, in baseball terms, a late-April extra-inning nail biter, while Mayweather-Pacquiao is game 7 of the World Series.

Floyd-Manny is the most historically significant boxing match since, possibly, Ali-Foreman or Ali-Frazier I. It’s the equivalent of prime Michael Jordan’s Bulls squaring off against prime Magic Johnson’s Lakers. It’s two legacies meeting in one showdown– something that only boxing can provide.

Yes, both Mayweather and Pacquiao are past their physical primes, but you’d need a Masters degree in fiction writing to invent a scenario where these two aren’t still #1 and #2 in the welterweight division, as well as the sport’s two biggest PPV draws, by far. Maybe the bout is taking place five years too late, but it still matters a whole lot. It is the biggest fight most of us will see in our lifetimes as fans.

This is not to say, however, that there isn’t legitimate reason to be disgruntled by the needlessly long five-year build up and the money fans are being asked to cough up in order to see it. It’s also reasonable to be skeptical about the actual stylistic match-up.

But did anyone really believe that the fans wouldn’t be asked to cough up a pretty penny for this fight? Did they expect anybody but high-rollers and celebrities to have access to MGM Grand tickets?

And as for the bout, itself…There’s reason to believe that Mayweather could turn this bout into a slow-paced chess match. But there’s also every reason to believe that Pacquiao, who is a special breed of fighter and human being, will not fall into a Robert Guerrero-like malaise and simply march to defeat, stupefied and numb for the last seven or eight rounds of the bout. Pacquiao is brimming with confidence and super charged by the real belief that he is on some sort of mission in smiting Mayweather. If he loses twelve rounds, he will lose those rounds while pushing as hard as he can.

Personally, I happen to think this bout will be a lot more competitive than some imagine. On paper, Mayweather’s style is perfect to beat Pacquiao’s, but in practice, Mayweather may have a tough time dealing with Pacquiao’s off-putting speed, awkwardness, and mental toughness. I wouldn’t be surprised if the bout was won or lost in the championship rounds.

But even if it’s a boring blowout, even if it has casual fans ruing the day they ever gave boxing another chance– this is THE fight.

Whether it’s a stinker or a thriller, there will be tons of talent and subtle technique involved. I’m tired of being told that we have to dumb down the product in order to appeal to the masses.

The reality may be that by rewarding fighters that can’t really box and actively devaluing the craft involved in learning to fight at the elite level, we are actually dooming the sport.

Rather than asking the boxing world to produce an equal to Guillermo Rigondeaux, for example, we’re castigating guys like Rigondeaux for being too proficient in boxing’s art of war. It’s an upside-down logic that would only exist in boxing. Imagine tennis fans and media insisting that Serena Williams slow down because she’s not giving her opponents a chance at having a classic match against her? Ridiculous. If Nonito Donaire can’t hit Guillermo Rigondeaux, it’s because he needs to raise the level of his game. It certainly shouldn’t be a knock on Rigondeaux, who is doing what he does and executing at the highest level.

If Pacquiao can’t catch and hurt Mayweather, it’ll be nobody’s fault but Pacquiao’s.

Actually, when you think about it, Mayweather-Pacquiao is the perfect fight for us to take back the sport from the short attention span MMA castaways who want to turn elite-level boxing into drunken bum fights. It’ll be a chance to educate casual fans about all the subtle things going on that affect the ebb and flow of the fight. A good announcer will do that. A good fan will do it as well. How do you attack against a flawless defense? How do you defend against a well-schooled, relentless offense?

I’m not too cool to admit that I am really, really looking forward to Mayweather-Pacquiao. Sure, there’s no guarantee that it’ll be a classic. It probably won’t be. Most sporting events are not classics, even those of great importance. But this is our Super Bowl and NBA Finals all rolled into one.

This is a fight of historical significance and one our grandkids will be asking us about long after the momentary buzz of Provodnikov-Matthysse has completely faded away.

You can email your comments, questions, or detestable network sell-out offers to Paul at paulmagno@theboxingtribune.com. You can also buy his book, Notes from the Boxing Underground! Paul is a full member of the Burger King Kids’ Club, a born iconoclast, and an ordained minister in the Universal Life Church.