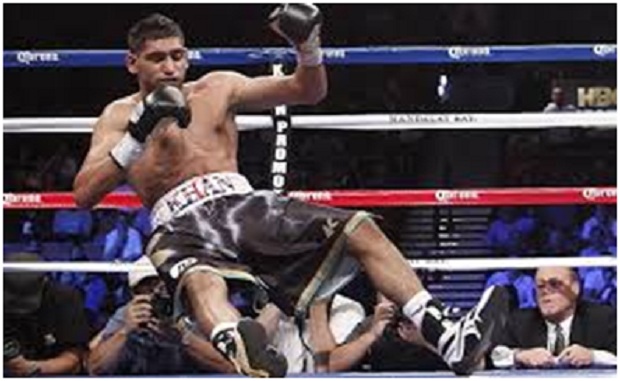 “I’m always going to have that chip on my shoulder,” he said. “It makes me run the extra mile. Keeps me disciplined. Makes me eat the right foods. It makes me run hills and eat rocks. It helps me stay disciplined and train hard.” —Danny Garcia

On 14 July 2012 in Las Vegas, Danny “Swift” Garcia met favorite Amir Khan. The fight was a title unification bout, as Garcia’s WBC title and Khan’s WBA Super title were both on the line. Khan entered the fight as a heavy favorite, with betting odds at 1-7 in his favor.

The fight got off to a bad start for Garcia as a fast Khan won the first two rounds and was well on his way to winning the third. Then the mugging began. With twenty-nine seconds left in the round Garcia countered a Khan combination with a left hook that caught the Brit on the neck and dropped him. Khan rose to his feet quickly but had been hurt by the punch, and referee Kenny Bayless took an extra few seconds after administering the standing eight count to make sure that Khan could continue. Garcia, a good closer, quickly went on the attack and nearly closed off Khan, who was saved by the bell. It was just a matter of time.

Eight seconds into the fourth, Khan, now on unsteady legs, could not withstand a barrage of punches from a rampaging Garcia, who was in full control and looking for the kill. Danny kept pounding away as Amir again went down. Referee Bayless administered another standing eight count

Khan tried to stay in the fight, but with forty-eight seconds left in the round, he was knocked down for a third time and this time he went down hard.. Bayless, after considering Khan’s condition felt he had taken enough punishment and stopped the fight, awarding a technical knockout victory and the WBA Super championship to Garcia.

Said Garcia after the beatdown, “When I fought Khan, I understood why I was the underdog. I was 8-1; I knew I was a young kid. Nobody in the boxing world knew who I was…I knew his game plan was to jump on me early because he thought I’d never been on that stage. I expected him to come out fast and throw a lot of punches and try to knock me out early. The game plan was to stay composed, stay sharp, keep your chin tucked, try not to take big punches and time them. That’s exactly what we did. We worked our whole training camp for that big left hook, and we just timed him in the middle of the ring.” 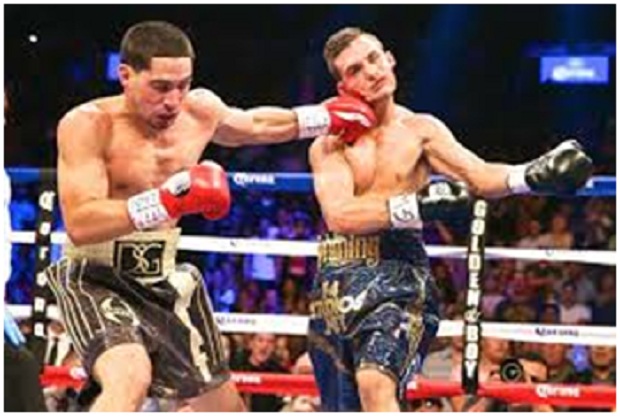 “I’m all about fighting the best fighters.” —Garcia after slaughtering 33-1 underdog Rod Salka,

A terrible mismatch makes for a sure-thing mugging and this one was no exception. The feather-fisted Salka (19-3) may not even have landed a punch in the first round. Solid body shots by the bigger and faster Danny Garcia (28-0) softened up Rod in the first round and prepped him for the predictable and particularly malevolent end. Told that he was boxing “beautifully” by trainer Paul Spadafora between rounds, Rod went out and was promptly decked by a power-laden right followed by crunching lefts to the body. Another right dropped him to a knee for the second time. It was crystal clear that Rod had no business in the ring with the WBA light welterweight champion. Attesting to this, a signature and scary Garcia left hook left from Hell sent Rod down and out. Salka simply had no chance.

Adding insult to injury, Professional cheerleader Sam Watson and his annoying gum-chewing twin sons with the silly grin on their faces cheered for the Al Haymon fighter as they are trained to do while Salka thankfully recovered on a stool.

Here are highlights of the slaughter: https://www.youtube.com/watch?v=BPZcxbxeH6Q