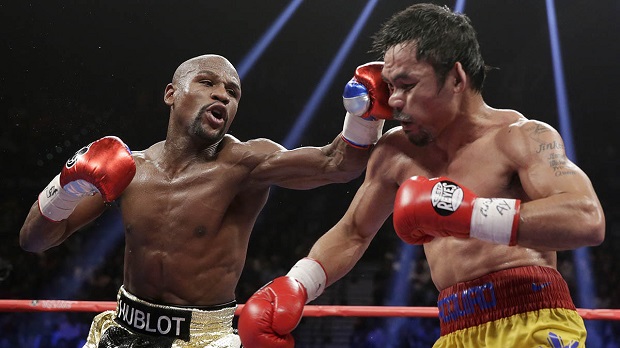 Hola amigos y familia, welcome to a fun-sized Butterfinger flavored edition of Panama City’s number one source for all things boxeo, The Sunday Brunch – We are Max Kellerman’s post-fight commentary to Manny Pacquiao. This week we’re having a little chit chat about a certain congressman and we are going to bring you a very honest, objective review of what took place Saturday night from the MGM Grand Garden Arena in Las Vegas, Nevada. Sell your “47-1” T-shirts on ebay and quickly delete all of your drunken anti-Mayweather drivel from Facebook, we’re about to sort through this nonsense. With that being said, I gave you your instructions in the dressing room; what I say you must obey – Cuidate, escucha me, toca los manos y buena suerte…Let’s get it on!

The fight was good.

It was captivating, engrossing and interesting.

It wasn’t fight of the year and there were no knockdowns, but Floyd Mayweather and Manny Pacquiao’s opposing styles made for a very fascinating and over-before-you-realized type of match-up.

When people say that Mayweather-Pacquiao was boring it’s likely because their guy only managed to land 19% of his total punches…Coincidentally, Floyd Mayweather’s last 13 opponents also landed under 20% of their shots on him.

When people say that Manny Pacquiao was robbed of a well deserved victory they should know that sane, rational individuals think that they sound as loopy and punchdrunk as Pacquiao himself in his post-fight interview.

Considering all of the pugilistic gifts he has, one of Floyd Mayweather’s most important talents is being able to take a fighter’s strengths away from them. Along with his vaunted power and incredible speed, Manny Pacquiao primarily wins fights with his ability to leap inside on a fighter and throw large combinations, hitting both upstairs and to the body – for all intents and purposes, Floyd Maywather neutralized that attack.

When Manny Pacquiao had to deal with a mobile Mayweather, or when the undefeated champion actively went on the offensive, Pacquiao’s punch output dropped significantly. In fact, Floyd Mayweather’s crisp counters and aggression kept Pacquiao’s connected blows in the single digits for nine out of the 12 rounds

Floyd Mayweather did what he had to do to defuse Pacquiao’s game plan. He smothered when he needed to, he pushed off to create space when necessary and he kept Manny Pacquiao honest, as they say, with solid and accurate counter punching.

Whether or not Manny Pacquiao’s shoulder injury had anything to do with his performance is completely irrelevant. Fighters usually carry injury into the ring when they fight in some capacity. The Nevada State Athletic Commission’s refusal to issue an anti-inflammatory injection to Pacquiao 90 minutes before the fight was also justified.

As the chairman of the NSAC, Francisco Aguilar said in reference to the post-fight press-conference injury reveal, “I made the decision to not allow [the injection] because of the timing of the request and the fact that the fight was going to occur in the next 90 minutes. We were not aware of his injury until tonight at 6:30. The medications he was taking were disclosed (Lidocaine, bupivacaine and celestone) in his medical questionnaire, but not the actual injury. This isn’t our first fight. This is our business. There is a process and when you try to screw with the process, it’s not going to work for you.”.

In ten years everyone will likely look back at both of these fighters and hold them in the highest regard. Much like today’s older boxing fans regularly draw comparison to the ‘fabulous four’ from years passed, Floyd Mayweather and Manny Pacquiao will both be looked at as the best of this generation and remembered and referenced equally as fondly by boxing fans.

One of the best things to come out of this whole event was the massive scale in which the world showed an interest in boxing, it’s nice that the judges didn’t fuck that up for us.

Thanks for joining us again this week, we’ll be back with more dangling participles, run-on sentences and randomly assembled catch phrases. We’ll have our summer menu recipes and we will detail a walkthrough for Dying Light. Send us penis enlargement emails at JESSEBOXINGTRIBUNE@GMAIL.COM or unfollow us on Twitter @JESSEBOXING. Until next time, sante.