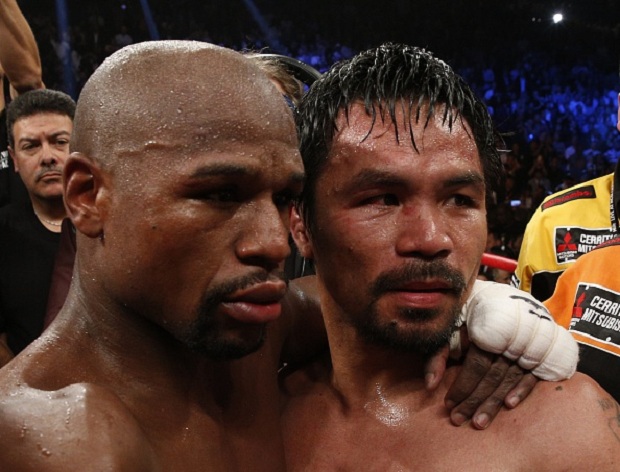 “…Fear is a friend of exceptional people.”
— Cus D’Amato

It’s hard to really take your opponent seriously when you’ve been told constantly for more than five years that he’s running scared from you, cowering at the very thought of facing his comeuppance. When your most trusted advisers and coaches have blown smoke up your ass about their dogged pursuit of this villainous cad, it’s tough to muster up that fear all fighters need to propel themselves to the next level.

From his goofy Footlocker commercials, proclaiming his elation at Mayweather ‘finally’ stepping forward (“He’s gonna fight me!”) to the pause during his ring walk where he stopped to take a cell phone selfie with trainer Freddie Roach, it was obvious that Pacquiao did not proportion enough respect for his rival. He allowed Jimmy Kimmel in Justin Beiber garb to turn his entrance into a late night talk show bit. The “mission from God” was marked by his knowing grins, confirming that he had finally caught the jackrabbit and that the hasenpfeffer would soon be served. Hell, Manny was practically giggling like a school girl throughout the weigh-in.

Oh sure, intellectually, he knew just how good Mayweather is and how this would be a test like no other. But I don’t think for one moment that he ever really respected Mayweather as a fighter. And, again, can you blame him?

Last Saturday night, Pacquiao fought like someone whose job was simply to flush the rabbit out of the bushes, rather than gun it down after doing so. Up until the post-fight interview, he seemed oblivious as to what he had done wrong and somehow managed to infer, with the aid of Max Kellerman, that he let up in the later rounds because he thought he was ahead.

He spoke like a man who had just been beaten by his inferior– a ravaging tiger bested by a sneaky weasel. How?

That Freddie Roach taught him strategy and technique aimed at neutralizing Mayweather, there is no doubt. And Manny likely worked hard at doing what he was taught. But deep down inside? Mayweather’s gonna get it..He can run, but he cannot hide…He’s been cornered.

Even with that mental hiccup in the back of his brain, Pacquiao is a special breed of fighter and one who seems to make things happen by sheer force of character. He did alright in the first part of the fight, even buzzing Mayweather in the fourth round.

But Mayweather is too good and every little thing counts when fighting him. By the middle rounds, Mayweather had figured things out while Pacquiao was growing increasingly puzzled.

Roach, Bob Arum, Michael Koncz, and crew spent five years conditioning Manny not to respect Floyd with their BS fake-chasing of a bout they never really pursued. The chickens came home to roost on Saturday.

Now come the justifications and excuses that all, really, boil down to an ignorant insistence on Mayweather standing still to allow Manny to hit him.

None of it matters, though. Mayweather won fair and square and any lingering doubts will be erased by history’s broad strokes. The seemingly endless debate is over–Floyd is better than Manny.

Pacquiao, in the right frame of mind, with a team not dedicated to blowing smoke up his ass while using him as a walking ATM, may have been able to take the victory. Maybe that tiny little twinge of fear twirling in his gut during training camp could’ve propelled him to even greater preparation, greater execution. Maybe not. We’ll never know. And Mayweather probably isn’t going to give him a second chance to make good on his “mission from God.”

We seldom have guest “Ranters” in this space, but when we do, it’s somebody big…Here’s a guest piece from writer, pianist, and former boxing manager Charles Farrell:

It was a lousy fight. And Mayweather, as has always been the case, thought of himself first, which was mostly why it was so lousy. That’s his right, but a lot of people spent a lot of money to see something that, if not memorable, should have been at least worth their time. Floyd didn’t look particularly good (something his father noticed), and he didn’t listen closely enough to the sound advice he was getting in the corner. But he was very competent against someone who wasn’t even that. It would take a huge campaign of prestidigitation to get a rematch off the ground. If that happens, it won’t approach being the moneymaker that last night’s fight was.

You can email Paul at paulmagno@theboxingtribune.com or listen to his weekly Boxing News/Zombie Preparedness podcast, “Left Hook to the Brain.” Oh yeah, and buy his book: Notes from the Boxing Underground! Paul is a full member of the Burger King Kids’ Club, a born iconoclast, and an ordained minister in the Universal Life Church.