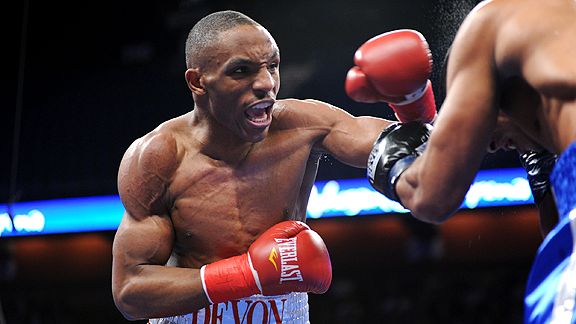 Examples reflecting the nobility of boxing continue to proliferate. Here are some of the more delusional ones:

Devon Alexander: “Only a vagina, when it is stretched can tighten back up. But when your anus is stretched out you are destroyed. Shows how unnatural it is….Adam and Eve was suppose to be with another woman”

Alexander: “You people Are sick”

Allan Omar::”The only thing sicker is having to watch your boring ass fights.”

Shane Mosley: “Some people blowing my mind. What year R we in 1960? I’m not gay, but I’m smart enough 2know telling gays “they are sick” is wrong”

Amir Khan: “When the question comes to me ‘why don’t you fight Kell Brook?’ – My body’s taken wear and tear fighting all the top guys, the world champions – so why isn’t Kell doing that? Why should I give him this big payday he’s after?”

Michael Woods (aka Woodsy) I [Mosley] kept looking in the audience to see him [Mosley’s son], but he wasn’t there. When I found out about it, after the fight,

Woodsy: “How about that…man [Mosley] wins career best fight, over the Golden Boy, and is pre-occupied with another matter, that being his son being almost smashed by a vending machine and maybe having broken bones or head trauma.”

Pat Russell: “I made the call that I made based on what I heard. That’s all I can say. It was an honest call on an honest issue.”

Jessie Vargas: “I am very religious so I began to pray for the right person to train me…Instantly, the name of Erik Morales came to me”

Lucas Browne: “I want to talk about Mr. Deontay Wilder. The guy’s a WBC champ – well done, congratulations, you’ve got a well padded record and your promotional team have done really well.” “You’ve got some power, don’t get me wrong. (But) You’re a tall and skinny bastard with chicken legs. That’s unreal. You’ve got some power but your chin is nothing whatsoever.”

Deontay Wilder: “Who has he [Browne] fought?…You can’t say you got a crackhead off the street and say you’re gonna knock him out. Because I know some crackheads right now, that’ll give you a run. I promise you.”

Browne on Twitter: “[Wilder] knows he’s on borrowed time, won’t have the balls to fight me. I’ll hit him back and hit him hard. Dog c***.”

Peter Quillin: “If anything was to happen to Al Haymon, I would retire from the sport of boxing.”

Floyd Sr.: “He’s not no top ranked fighter, in the rankings. He held all night. Broner looked like nothing…With all that stuff he does…the women…the drinking…all that stuff. He’s not going to do nothing. He looked like a bum. First, he needs to learn how to fight. If he wants to learn how to fight, he needs to come see me – or else forget it, done. My whole saying is, it’s my way or the highway and no other way.”

Mike Stafford: “What Floyd Senior is doing, he’s an opportunist living off his son, saying he’s the best off his son. He don’t know nothing about developing talent, someone else’s son.”

Devon Alexander: “This is the beginning of the end.”