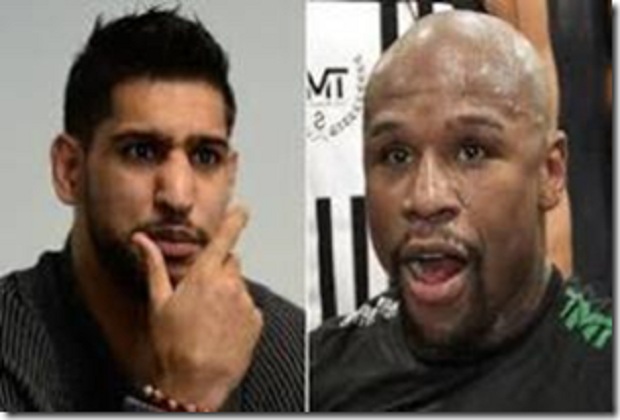 Led by delusional incongruities from motor-mouth Amir Khan, insults, contradictions, cocky and moronic comments, and even fawning continue to jolt our intelligence and take the bar lower and lower.

Sugar Shane Mosley: “Guess who’s mad? All the doubters. Cause my fight is trending right now. I’m a ninja. This gonna be the realist fight all year #MosleyMayorga….Anyone who knows me knows I don’t pull fake stunts. Never cause I’m too fu***** real. If I smack a cigarette out of some b****’s face, it’s damn sure ’cause they were about to catch these hands and I was keeping calm. Anyone saying that sh** ain’t real can catch and get these hands too.”

Sly Stallone: “He [Berto] has no chance.”
Floyd Mayweather Jr:: “I chose Berto because he’s very exciting. Andre Berto is going to push Floyd Mayweather to the limit. That’s one thing I do know…“Berto is a tough competitor, a former world champion and every time he goes out there, he gives it 100 percent,”
Mayweather: “Berto is a very tough guy, he’s hungry and he’s not going to lie down,”

Mayweather: “There will be blood.”

Leonard Ellerbe: “Berto isn’t going to sit back, and we know he isn’t going to be complaining about his shoulder. We’ve done seen him fight with one arm.”

Mayweather: “Day one of my career, my first fight…my uncle Jeff Mayweather, we taught Dana White about…I think that’s when Dana White used to work for us, when he used to be with us…before he cut his hair off and became a tough guy in the MMA; he was a little square guy used to run away with me,”

Paul Magno: “absolute, undeniable truth is that boxing’s promoters need to get off their asses, move away from petty feuds with business rivals, and actually PROMOTE.”

Mayweather Senor: “I would fight Amir Khan right now in the ring”,

Khan: “I’d never like to say, what would’ve happened if Amir Khan would’ve fought Mayweather? I know deep down I’d beat the guy. That’s always going to be in the back of my mind if the fight never happens.

Khan: “I have the blueprint to beat Mayweather.”

Khan: “To win a fight against someone like Pacquiao, the key is speed, movement and distance and that’s how Mayweather beat him,…Floyd beat him by being sneaky and he made it look so easy. If you stick to the same game plan that Mayweather used, then it’s an all-day win for me.”

Khan: “I’d like to fight Danny Garcia again. If that option came up, I’d grab it with both hands. That’s a fight I’d like to take,”

BJ Flores: “He [Khan] talks too much, he needs to be quiet and let his handlers work on it. That’s how deals get made and that’s how big fights get made,,, Floyd is like, ‘I’ll fight anybody I want, and you’re not a big enough name to where I’m going to be forced into doing anything.’”

Antonio Tarver: ”Tyson Fury has done a great job keeping his name in the media, but I haven’t been impressed by his boxing skills. Basically he’s all size. He has a little jab because of his size, but no power. If Cunningham dropped him, Klitschko’s going to destroy him when he touches him with his right. He talks a lot and is animated but, ability-wise, I don’t think much of him,”

Conor McGregor: “I’d dismantle Floyd Mayweather and so would Ronda Rousey… it’d be like playing with a baby…”

Manny Pacquiao: “He [Mayweather] was running away all the time. I was making the fight by stalking him, and I believe that I deserved a victory.”