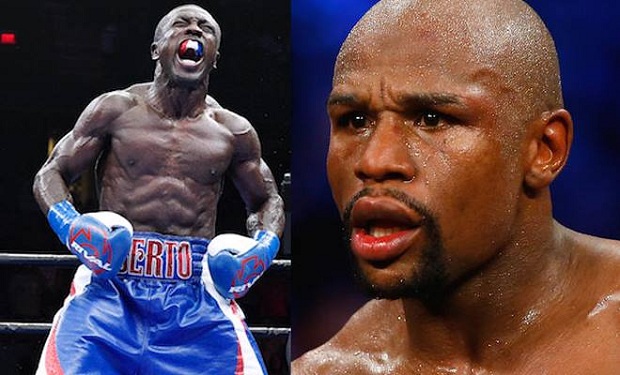 Hola amigos y familia, welcome to a hastily scribbled edition of Panamá City’s highest rated, most money-spinning proper pugilistic paper, The Sunday Brunch – We’re sparring with Mayweather, bragging about our credentials and taking the perfect selfie. This week we are going to take a peek at a few things Andre Berto must do if he wants to defeat Floyd Mayweather. Get some magical saltwater and rub it on what ales ya, we’re about to sort through this mess…With that said, I gave you your instructions in the dressing room, what I say you must obey; eschua mi, toca los manos y buena suerte…Let’s get it on!

Now that everything for Floyd Mayweather’s “farewell bout” is officially official and the Showtime All Access cameras are rolling, it’s time to take a closer look at some stratagem for one Andre Berto as he approaches the apex of his career.

These are the four things Andre Berto must do to defeat Floyd Mayweather.

4. Back in 2011, Andre Berto squared off against Victor Ortiz in what was an exciting, back and forth war between two well-matched boxer/punchers.

Ultimately, Berto was on the losing end of that showdown, but his stock rose immensely in many people’s eyes as his effort, courage and determination were showcased in that dramatic meeting.

As Andre Berto winds down his camp, he will need to harness that same grit and focus to wedge a “1” on to Floyd Mayweather’s unblemished record. “He has to want it more than Floyd”

3. As is the case with most – if not all – of Floyd Mayweather’s fights, the first few rounds (sometimes up to three) are generally spent as a period of data collection.

Some fighters use the opening moments of a bout as their “feeling out round” where they try to figure out their opponent’s plan of action. For Mayweather, this time is very important and he usually plays defense while absorbing information in those critical first minutes.

Andre Berto will be best advised by his trainer, Virgil Hunter, to pounce on the undefeated champion in order to maximize his momentum and to interrupt Floyd Mayweather’s processes. As the fight drags on, Andre Berto’s chance at victory decreases dramatically.

2. Speaking of Virgil Hunter, the world class trainer often has sage advise for his fighters, however, savage images from Hunter’s charge, Alfredo Angulo (from his crushing loss at the heavy hands of Canelo Alvarez), come to mind when one thinks about horrible advice.

Andre Berto has had a good career up to this point. While it is not perfect, he can still use the lessons he’s learned to help himself when hes standing opposite from the self proclaimed “TBE”. Berto needs to not to be a fighter who solely relies of the advice of his corner.

1. Andre Berto ‘ raw athleticism and apparent hunger will make this a much more competitive (in spots) bout than many are assuming. His confidence, focus, strength and speed will all need to be running in unison for the upset to be possible.

While it’s not an impossible task, facing the best fighter he’s ever faced will take courage and determination from a place that, perhaps he’s not found yet. Virgil Hunter will need to keep his fighter calm, relaxed and sharp if he wants to defeat Floyd Mayweather.

Thanks for joining us again this week. Next Sunday we’ll bring you the recap of what will definitely not be Floyd Mayweather’s last fight. We will have soda and cookies, so make sure you bring a friend. Follow us on Periscope where we do daily food and boxing videos @JESSEBOXING on Twitter @JESSEBOXING or email us your wife’s title pics at JESSEBOXINGTRIBUNE@GMAIL.COM … until next time, sante.