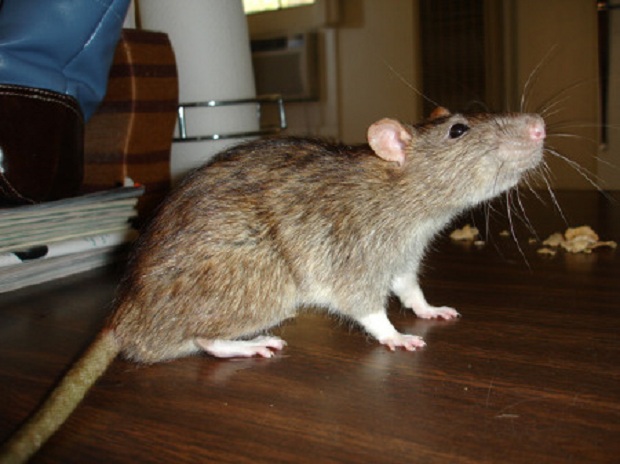 In my ten plus years in Mexico, I’ve learned lots of useful things like how to rid my house of scorpions, black widow spiders, and lizards; how to deal with cartel thugs; and how to chase away ladies of ill-repute who want US papers. Rats, though, are another story.

Earlier this week, I had one in my kitchen, looking for a place to nest. As a practicing Buddhist, my house is a strict “no kill” zone, so I had to go through the usual routine of stalking, trapping, and releasing the creature in a far-away sewer drain. The sight of an enormous gringo in Bermuda shorts and sandals chasing after a rat with a soup pot while bemused locals gaze through the window is a story for another website.

Anyway, rats are truly a formidable foe. They’re smart enough to develop strategies and hungry enough to be persistent. Given enough time, they’ll gnaw through a cement wall and steel drain pipes. The drive to get what you got, gobble it up, and shit on your counter tops is built into their DNA.

And that leads me to the topic of this Monday Rant– Corruption in boxing.

Much like stowaway rats in your kitchen, the true scoundrels in the sport are smart enough to play dead when danger is around and persistent enough to go right back to chewing up your groceries when the coast is clear.

Poke a stick underneath the sink and the rat will scurry away. It’ll find a nice place to hide and stay there silently until the coast is clear. Then, back to eating your stuff and shitting all over your kitchen.

In boxing, there are occasional spikes of outrage that force the hand of the power brokers, like last week’s suspension of the three lunk-head judges in charge of the Paul Williams-Erislandy Lara debacle. A big deal is made of the actions taken to “correct” the wrongdoings and then, when enough time has passed and when the public is no longer crying for justice, the guilty parties are reinstated to resume their skull-fuckery.

Those who scoff at the idea of reform are both right and wrong. Right, because nothing ever changes over the long run. Wrong, because things do happen when the fans get pissed off enough.

Case in point is Texas embarrassment, Gale Van Hoy, who turned in one of the most obscenely disgusting decisions by scoring what should’ve been a close win for Paulie Malignaggi as a 118-110 rout for Juan Diaz.

Malignaggi’s impassioned post-fight interview and the subsequent active, aggressive outrage of fight fans forced even the putrid Texas Commission to take action. All the attention forced the issue into the forefront of the sport’s collective unconscious, calling into question many previous decisions where Van Hoy shamelessly favored the hometown fighter. In the two years since that outrage, Van Hoy has only been allowed back into the judge’s seat five times, only two of those in Texas and none featuring Texas fighters.

When the public roars en masse, things do get done.

Unfortunately, the outrage dies down and, like a rat realizing that you’ve gone to sleep, the scoundrels go right back to doing what they do best.

For the media, the easiest thing in the world is to rail against officials, judges, and entire commissions. No commissioner is providing free media buffets. No judge lords fighter access and ad money over a website owner’s head. So, this battle against the legislative branch of boxing grift is considered “safe” outrage.

The thing is that few fans realize the incestuous relationship between promoters and commission officials. Promoters, literally, foot the bill for commission slugs to work their magic. Hence, the odd coincidence that few judging irregularities ever go against the lead promoter’s fighter.

What few also realize is that while the promoters are footing the bill for those officials who repeatedly chase fans away with poor “judgment calls,” they also subsidize most of the major media sources in boxing.

So…outrage will be allowed, token actions will be taken…but don’t ever expect lasting change to be implemented when those paying for the corruption are also paying for the media that covers it.

Some of us will keep writing about the dirty sludge at the bottom of boxing’s illusion-making machine, but it’s up to the fans to do the preemptive strikes before honest fighters get cheated. Hold the commissions, judges, promoters, and, yeah, the media responsible for putting out an honest product. Ultimately, they have to listen. You pay their salaries.

You can email Paul at paulmagno@theboxingtribune.com or check him out as he frightens meddling teenagers in his haunted amusement park. But first–  buy his book: Notes from the Boxing Underground! Paul is a full member of the Burger King Kids’ Club, a born iconoclast, and an ordained minister in the Universal Life Church.