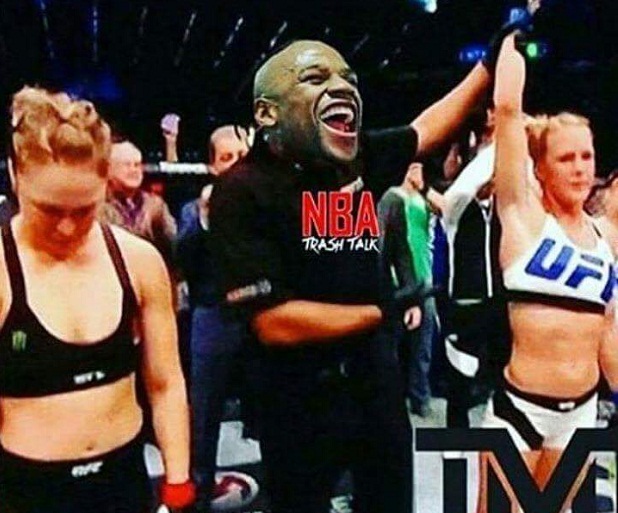 Hola amigos y enemigos, welcome to a sparkly purple puffy-paint and watermelon lip gloss-scented edition of Panamá City’s highest rated, most money-spending proper pugilistic paper, The Sunday Brunch –We still don’t believe they killed off Glen in The Walking Dead. This week we are taking an unprecedented peek into the heavily-muscled, testosterone testing ground that is the UFC. Ronda Rousey got taken to school by boxing alumna,Holly Holm and we’re all over it like a frat guy at Buffalo Wild Wings drunkenly trying to get the cellphone number of his high school-aged waitress. So, go back and delete all of your late night Facebook posts and sell your Ring Magazine “Ronda Rousey” special edition on eBay, we’re about to give somebody a big time colonoscopy. With that said, I gave you your instructions in the dressing room; what I say you must obey. Cuídate, eschuame y buenasuerte…Let’s get it on!

“…when I heard UFC say that RRR was the best woman fighter ever I was like, kiss my ass! I have 8 world titles in 4 different weight classes and I defended them at the same time. I retired because no woman would fight me and I don’t say that I’m the best.”– Ann Wolfe

“…she is the type of fighter that you have to be very, very patient with…I feel like she’s going to try to keep distance from me, like, try to stay away from me and try to get me frustrated so I’ll make a mistake and she can kick me in the head. But, it’s not going to go like that.” – Ronda Rousey

I don’t want to sit here and say that you or I could see this coming from a mile away, but the signs were all there.

From the first moments of the opening round you could just see that Ronda Rousey had no answers for straight punches. She had no real footwork to speak of, no head movement and no kind of game plan to deal with a boxer.

And this is not to say anything bad about Ronda Rousey (well, not too bad), because she is very good at judo and her take downs are nice, but when you pair her with somebody other than lunch ladies, housemaids and pediatric care specialists, well, you saw what happened.

If you know boxing, you knew that Holly Holm’s best chance was to keep the fight vertical, because Ronda Rousey would be looking for a takedown and submission at every opportunity.

And the video Rousey posted to YouTube featuring her and former unified boxing champion, Vic Darchinyan sparring some months back? Who was that supposed to impress?

The short film demonstrated just how bad her boxing actually is.

Let’s be honest for a moment here. When is the last time you saw a world champion swing a punch so recklessly that their momentum makes them fall to the floor from missing so fucking badly?

I just hope that we as a community don’t need to hear any more nonsense about Ronda Rousey beating Floyd Mayweather, or how she’s ‘the best female fighter ever’ from the meatheads of the UFC – or boxing’s own Golden Boy.

Let’s face it, this was a fight that was pretty much set up for Rousey to dominate (even the betting lines had Rousey as a -2000 favorite), but instead of taking this challenge seriously, she acted faux pissed off and unprofessional – and it came back to smack her right in the tits.

Think I’m an asshole who doesn’t know shit about shit? Leave us a message in the comments section below and you’ll be entered into some kind of contest to win something at some point or another.

Thanks for joining us again this week, we’ll be back next Sunday where we talk about the highly-anticipated Miguel Cotto-Canelo Alvarez showdown. We will list in great detail all the instances where Canelo punished Miguel Cotto and we will talk about his impending retirement from the sport after the beat down he will likely receive. Until next time, sante.