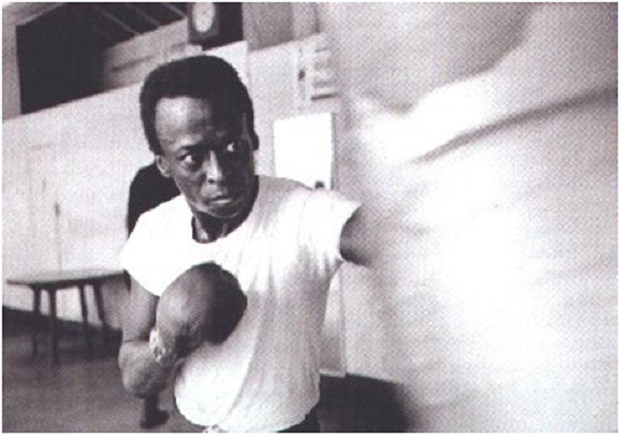 And Larry Merchant once said that a prime Roy Jones Jr. was like “Oscar Peterson with Boxing Gloves.” If fast fingers and a hardwired sense of swing defined Peterson, fast hands and a seldom-seen sense of reflexes defined Jones. I wrote about that as well.

“He boxed as though he were playing the violin,” sportswriter Barney Nagler.

After making an estimated $4 million in the ring, Robinson spent himself into destitution by the mid-sixties. Then he reinvented himself by getting into show business — acting and even singing. But he would always be remembered for the music he made in the ring.—Ron Flatter

Sugar Ray Robinson “made music in the ring” but the trick was to find a real musician worthy of comparison. If Sugar was the best—and he was in my eyes, then my selection also needed to be topnotch. Charlie Parker quickly comes to mind but he was a bit too hard bopish to fill the bill. Arguably the greatest alto sax player of all time, “The Bird” lacked the variety required for an appropriate comparison though he did extend the boundaries. John Coltrane and Herbie Hancock might work along with a number of other immortals, but the person I was looking for was someone who was at the forefront of multiple musical styles—someone who consistently reinvented and improved his game. I found him but I’m getting ahead of myself.

Sugar Ray Robinson (born Walker Smith Jr.) defined what a boxer puncher was all about—what versatility and being a creative genius in the ring was all about. He could use virtually any style; he could brawl in one round and then adjust as a fluid and slick, albeit risk-taking counter puncher in the next, and then suddenly resort to separation and fighting on the outside. With great speed and power, Sugar could do it al—whether traditional (with a solid jab setting up combos), or with lead hooks and uppercuts in an unconventional way.

Robinson (173-19-6), could be cold and mean inside the ring well aware that his job was to “hurt people.” He possessed quick feet, lightning-fast hands, and devastating knockout power. He was an anticipatory tactician with exceptional fundamentals which he continually polished with self-taught fighting techniques. He moved around the canvas in just about any direction using the unmatched footwork-of a dancer- side-to-side, forwards and backwards, the latter even while throwing a damaging punch. Ray threw his punches correctly, i.e. short, crisp and so fast that you wouldn’t notice that he already had knocked his opponent down. He was smooth and fluid and his movements were so effortless that it was like describing a virtuoso jazz trumpet player doing his thing. If this were music, it might be described as using complex chord progressions and innovative harmonic form.

Sugar Ray displayed a variety of effective punches—according to a Time magazine article in 1951, “Robinson’s repertoire, thrown with equal speed and power by either hand, includes every standard punch from a bolo [yes, bolo] to a hook—and a few he makes up on the spur of the moment.” Robinson commented that once a fighter has trained to a certain level, their techniques and responses become almost reflexive. “You don’t think. It’s all instinct. If you stop to think, you’re gone. He ventured from the tree trunk but always returned,

Ray’s boxing ability was of the highest and most adventurous order and he is often cited as the greatest boxer of all time. See” https://www.youtube.com/watch?v=dqMAHlEL4qU

Miles understood that the boxer must finally lose his title, by either retirement or defeat, while the musician can remain king forever. Boxers and musicians are both itinerant workers in the arena of individualism, both pay the dues of a brutal meritocracy, and though public figures, both are embedded in a shadowy elite with its own code of values under the spotlights.” John Szwed

This trumpet playing genius was a great fan of boxing and loved to hobnob and workout with fighters especially those in Chicago and New York. The following is taken from “So What: The Life of Miles Davis” by John Szwed, Simon & Schuster, 2002

“In Chicago, Miles met Johnny Bratton, a flashy welterweight boxer from Arkansas who had made the city his home base. Bratton was a year younger than Miles and they were similar in physiques and tastes, though the fighter dressed a bit flashier with brilliantined hair and a fondness for purple shirts.

“Miles went out with Johnny a few times in his new convertible. One time the cops stopped Johnny for speeding but let him go when they recognized him. It’s Honey Boy Bratton! Miles was really impressed by that. Bratton was a classy and graceful fighter who took on some of the best boxers like Ike Williams and Beau Jack. When Ray Robinson moved up to middleweight, Johnny won the welterweight title and held it for a few months until Cuban Hawk Kid Gavilan, took it away from him. Bratton fought professionally for 11 years but his career ended badly and he wound up living in his car, then homeless, and finally in and out of mental hospitals. But it was said he was a sharp dresser even to the end.”

“Bill Cayton, fight manager and president of Big Fights Inc. was directing a documentary about Jack Johnson (“Breaking Barriers”) and asked Miles Davis to do the music for it. Davis went to work on it enthusastically, reading everything he could about Johnson and boxing history, watching films of classic matches and sleeping with a photo of Johnson near his bed. He would discuss boxing with an intensity you couldn’t imagine, said Cayton. He’d come to our office and ask for a bunch of films. He’d put the spool on the projector, then sit there and watch for hours. Every once in a while he’d come running up to me and say, Bill why did this happen? How come Joe Louis got hit with that shot?

“Jack Johnson was one of Miles’ favorite recordings for a long time and its obvious why from the first note.”Listen to the driving beat of this treasure: https://www.youtube.com/watch?v=DEBKksupBVA

Said one poster: “I was on my way home from college last night when I stumbled across a random station playing this, I pulled off the road, parked and just zoned out to the genius that was coming through the radio waves. Blown away, utterly, completely blown away by the levels of genius at work here.”

These excerpts from Miles: the Autobiography, by Miles Davis with Quincy Troupe discuss in part the close friendship of Miles Davis and Sugar Ray Robinson, See: http://www.jerryjazzmusician.com/2015/05/great-encounters-41-friendship-miles-davis-sugar-ray-robinson/ Here are some examples:

“Boxing is a science, and I love to watch boxing matches between two guys who know what they’re doing. Like when you see a fighter put his jab on the outside of his opponent. If the guy slips the jab, moves to the right or left, you got to know which way he’s going to move and throw your punch at the moment he’s moving his head, so that it comes right into the line of the punch you’ve thrown. Now that’s science and precision, rather than just some kind of fucking mayhem like people say it is.”
…

“…you’ve got to have style in whatever you do – writing, music, painting, fashion, boxing, anything. Some styles are slick and creative and imaginative and innovative and others aren’t. Sugar Ray Robinson’s style was all of that, and he was the most precise fighter I ever saw. …that Sugar Ray Robinson would put an opponent in four or five traps during every round in the first two or three rounds, just to see how his opponent would react. Ray would be reaching, and he would stay just out of reach so he could measure you to know you out, and you didn’t even know what was happening until, BANG!, you found yourself counting stars. Then, on somebody else, he might hit him hard in his side – BANG! – After he made him miss a couple of jabs. He might do that in the first round. Then he’d tee-off on the sucker upside his head after hitting him eight or nine more times hard in the side. Maybe he’d hit him four or five times hard upside his head. Then he’d switch back to hitting him hard in the ribs, then back to the head. So by the fourth or fifth round, the sucker don’t know what Ray’s going to do to him next. Plus, his head and ribs are hurting real bad by this time.”

Mind you, that’s a musician describing the intricacies of how a boxer sets traps.
************
Not everyone gets a chance to witness historic greatness in person but back when I was living and working in Geneva, Switzerland in the early 90’s that rare opportunity came my way when I attended the Miles Davis & Quincy Jones Montreux Jazz Festival in this small, scenic town off Lake Geneva. Little did I know it would be an ailing Davis’s last performance? “Miles & Quincy: Live at Montreux ”[sic] was released posthumously August 10, 1993 on the Warner Bros. label. The CD music contains a single disc with 16 songs. A sampling: https://www.youtube.com/watch?v=e9bq_wWqa3w

Many critics and fans who had been somewhat disappointed with his experimental late period were happy that he had ended his career in such a way. The music was romantic, melancholic, and gorgeously melodic. Whether muted, electrified or pure, it was unforgettable.

Like Sugar Ray, improvising was Miles’s thing but he did it over (and within) different time periods. He was as versatile as any musician and boxer could ever be, moving from bebop (1944-38) to “Hard bop and the Blue Period” (1950-54) to his first great quintet and sextet (1955–58) and then his great recordings with Gil Evans (1957-63) to Kind of Blue (1959-64). Jazz Fusion and Electric Miles occurred from 1968–75 during which he recorded the widely popular Bitches Brew reaching Gold Status.

But in September 1975, Davis withdrew almost completely from the public eye for six years living as a virtual hermit fighting his personal demons. However, like Sugar Ray, he too made a comeback, though a more successful one.

Davis is regarded as one of the most innovative, influential and respected figures in the history of music. His approach has been described brilliantly by music writer and author Christopher Smith as owing largely to the African American performance tradition that focused on individual expression, emphatic interaction, and creative response to shifting contents.”

Like Sugar Ray, Miles consistently reinvented his style. He too had a profound impact on generations of jazz and many of the young and brilliant musicians who played with him were propelled to higher levels of fame because of his success. .

Miles Dewey Davis III died on September 28, 1991, from the combined effects of a stroke, pneumonia, and respiratory failure at the age of 65. He is buried in Woodlawn Cemetery in the Bronx.

Eric Dolphy once said, “When you hear music, after it’s over, it’s gone, in the air, you can never capture it again” Both Sugar Ray and Miles could create a masterpiece and then it disappeared into the air and while you might not be able to capture what they did, it just might pop up on some YouTube.