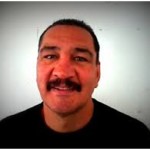 Garcia vs. Benton (1990) “The fight was televised live nationally on USA Cable, and La Mancha employees said their switchboard was deluged with telephone calls in protest of Yanez’s handling of the fight.”—From Times Wire Services dated November 7, 1990. “Referee Roger Yanez, apparently on a lunch break, didn’t intervene and it looked like Benton had been killed. He … END_OF_DOCUMENT_TOKEN_TO_BE_REPLACED