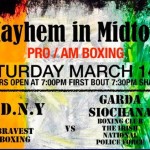 “We will fight anyone, anywhere, anytime… for a good cause.” –FDNYboxing.com Saturday night at Madison Square Garden, the New York City Fire Departments Bravest Boxing team hosts a charity event that will bring both professional and amateur fighters together for the first time under the MSG roof. Promoted by DiBella Entertainment, Ring of Fire Promotions, and FDNY Bravest … END_OF_DOCUMENT_TOKEN_TO_BE_REPLACED 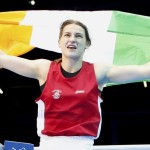 In 2011, Katie Taylor served as grand marshal at Dublin’s St. Patrick’s Day Festival Parade. This year, as Ireland’s 2012 Olympic gold medalist, Taylor will be serving as the grand marshal at Toronto’s St. Patrick’s Day parade to be held Sunday, March 16th. She stated via her Twitter account a few days ago, “Excited and honored to be Grand Marshal for the Toronto parade! Off to … END_OF_DOCUMENT_TOKEN_TO_BE_REPLACED 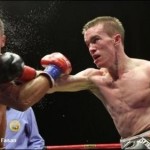 Coming off his first career defeat, Dublin born lightweight Jamie Kavanagh (15-1-1, 7 KO’s) will be back in the ring this St. Patrick’s Day. The Golden Boy fight card will be televised on Fox Sports 1 and word is that the NABA and IBO International title holder Rod Salka (18-3, 3 KO’s) has been offered the fight. According to Irish-boxing.com Salka, coming off a disputed … END_OF_DOCUMENT_TOKEN_TO_BE_REPLACED 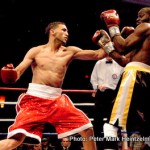 On the undercard of the Martinez-Macklin bout, Edwin “La Bomba” Rodriguez (20-0, 14 KOs) will face Don “Da Bomb” George (22-1-1, 19 KOs).  The bout will take place at Madison Square Garden in New York, New York.  The bout will air live on the HBO World Championship Boxing broadcast that begins at 10PM ET/7PM PT. At the age of 26, Rodriguez comes into this bout undefeated and … END_OF_DOCUMENT_TOKEN_TO_BE_REPLACED