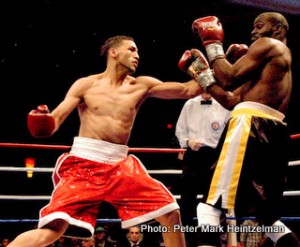 At the age of 26, Rodriguez comes into this bout undefeated and ranked 18th in the world among super middleweights.  He lives a short distance from New York City, which should give the fighter the edge when it comes to fan support.  Additionally, his 76” reach will give him a six-inch advantage over his opponent.

Since 2010, Rodriguez has fought seven times, winning four by knockout.  In April of 2010, he defeated Kevin Engel when he knocked him out in the sixth round with a body shot.  In November of the same year, he faced James McGirt and took home a ninth round TKO win.  In his next bout, he took on Aaron Pryor Jr. and walked away with a unanimous decision win.

George resides in Chicago and comes into this bout with only one loss on record.  On July 30, 2010, on ESPN’s Friday Night Fights, George stepped in the ring against Francisco Sierra, who was 21-3 at the time.  With thirty seconds to go in the seventh, George suffered a knockdown.  Then, at the sound of the bell in the same round, George took a right hand that sent him to the canvas.  The referee ruled that the punch took place after the bell and Sierra was deducted two points while George was given five minutes to recover.  Even after the full five minutes, George was unable to continue and the fight went to the scorecards (as the referee determined the punch was not thrown with intent after the bell).  George took a technical decision loss.

George followed that loss with two TKO wins.  In February of 2011, he defeated Cornelius White, who was 16-0 at the time, after sending him to the canvas three times in round one.  Two months later, he took on Maxell Taylor, who was 16-2-1, and walked away with an eighth round TKO.  The bout on Saturday will mark nearly a year since George has last fought.

The main event will feature Sergio Martinez vs. Matthew Macklin in the middleweight division.