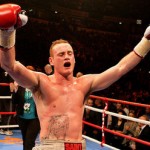 O2 Arena, London, England-- The blazing-hot out-of-ring rivalry between Olympic gold medalist, James Degale (10-1, 8 KOs) and George Groves (13-0, 10 KOs) resulted in a rather bland, uneventful twelve round majority decision in favor of Groves. DeGale came out boxing with swagger, stalking a passive Grove, who looked intimidated by the event. But, as rounds passed, DeGale … END_OF_DOCUMENT_TOKEN_TO_BE_REPLACED 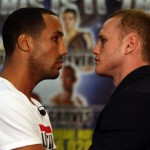 Olympic gold medalist, James DeGale (10-0, 8 KOs) and bitter rival, George Groves (12-0, 10 KOs) have taken their feud to an even higher level by agreeing to a "winner take all" side bet for their bout Saturday at the O2 Arena in London, England. The DeGale-Groves feud has been simmering for years, from the time they were gym mates, right through to Groves decisioning … END_OF_DOCUMENT_TOKEN_TO_BE_REPLACED