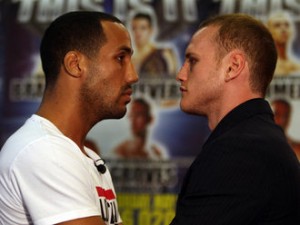 Olympic gold medalist, James DeGale (10-0, 8 KOs) and bitter rival, George Groves (12-0, 10 KOs) have taken their feud to an even higher level by agreeing to a “winner take all” side bet for their bout Saturday at the O2 Arena in London, England.

The DeGale-Groves feud has been simmering for years, from the time they were gym mates, right through to Groves decisioning DeGale in their meeting as amateurs. DeGale would eventually go on to become an Olympic gold medalist and debut as a much-publicized, and highly regarded professional while Groves would take the much more modest route, fighting in small halls and as a mid-card attraction on a couple of high profile undercards.

DeGale-Groves will be for DeGale’s British super middleweight title and has been elevated to main event status following now-former WBO light heavyweight champ, Juergen Braehmer’s withdrawal from his scheduled defense against Nathan Cleverly.