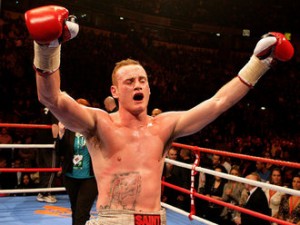 DeGale came out boxing with swagger, stalking a passive Grove, who looked intimidated by the event. But, as rounds passed, DeGale was never able to pull the trigger and his inability to do so allowed Groves to gain confidence with each passing moment.

By the middle rounds, Groves was starting to land some solid shots against a DeGale who was still stalking, hands down, but unable or unwilling to let his hands go.

The contest was close throughout, with neither fighter doing much to be considered dominant. At the end of twelve, the judges’ scorecards reflected the closeness of the contest: 115-115, 115-114, 115-114 in favor of Groves. The Boxing Tribune scored the contest 114-114.

— In the first defense of his newly-acquired WBO light heavyweight world title, Nathan Cleverly (22-0, 11 KOs) did away with Poland’s Aleksy Kuziemski (21-3, 5 KOs) in four rounds when the referee waved off the contest due to a cut over Kuziemski’s left eye.

Except for a brief period in the third round where the Polish challenger landed some solid shots, Cleverly was in clear control, boxing at a comfortable distance and landing blows to the head and body of his rival at the time the fight was stopped.

Kuziemski was Cleverly’s third opponent in as many days, after then-WBO champ, Juergen Braehmer pulled out of the contest and replacement, Tony Bellew was unable to make the 175 lb. limit.

— Middleweight prospect, Bill Joe Saunders (9-0, 6 KOs) overwhelmed Kevin Hammond (9-7-1, 4 KOs), dropping him twice in the second round with strong body shots before the ref waved off the contest at the end of the round.