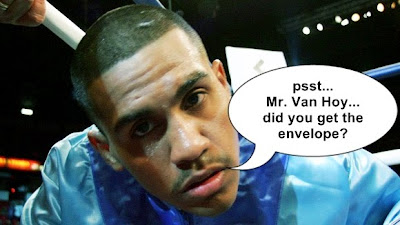 While the general boxing public cries and gnashes its teeth about the rotten sanctioning bodies, I have always held to the belief that the real culprits are the ones with the smiles, the posed publicity photos and the flowery language…The Promoters.

The “alphabet soup” boys deserve their fair share of abuse, but let’s not forget that, like in most criminal organizations, the real devils can be found by simply following the money. The sanctioning bodies are merely props playing the role of dim-witted Fredo Corleone to the major promoters’ Godfather.

In the case of boxing, the promoters have the checkbooks and it’s their ultimate call as to which fights get made and where we’ll be able to see them. The promoters have their fingerprint on every aspect of the game, even when it comes to the officiating.

For those unfamiliar with the behind-the-scenes mechanisms of boxing and just how incestuous the relationships are, Mitch Abramson of the NY Daily News wrote an outstanding article on the subject over the weekend. It sheds a lot of light on just how whacked-out the situation really is:

After scoring a fight last Saturday in Houston, Gale Van Hoy, a 75-year-old professional boxing judge, got off his stool and huddled with his boss, Dickie Cole of the Texas Department of Licensing and Regulation.

In a private meeting that night, Cole presented Van Hoy with an envelope. Inside the envelope was a check for $1,800.

The check was signed by Golden Boy Promotions, which promoted the fight between Brooklyn’s Paulie Malignaggi and Houston’s Juan Diaz.

If someone didn’t know any better, the act of Van Hoy collecting a paycheck from Golden Boy Promotions might be considered a bribe. After all, his scorecard helped advance the career of a Golden Boy fighter, as Diaz has an exclusive contract with the company.

…In the dense world of boxing, judges who score these fights are on the payroll of the event’s promoter.

For appearances sake, the promoter hands the check over to the commission, who then delivers it to the judges.

But the result is the same: The promoter is paying the judge to make a decision in a fight the promoter has a financial stake in.

The relationship doesn’t end there. In California, if a judge lives more than 100 miles from the fight venue, he receives lodging and a per diem of $25, all courtesy of the show’s promoter. Van Hoy told me he was given $80 for meals over two days while staying in a hotel for the night, courtesy of Golden Boy Promotions.

This is outrageous. In no other major professional sport is a team owner responsible for the salary and housing of its officials.

You don’t see Yankees owner George Steinbrenner pulling up in a golf cart and cutting a check for “Cowboy” Joe West, or any other umpire. Major League Baseball handles that fiduciary duty. You don’t see James Dolan, who oversees the Knicks, waiting in a Garden corridor to pay Dick Bavetta.

There is also no review process in most states after a controversial decision in boxing. Van Hoy said that Dickie Cole “was not unhappy at all,” by his scorecard. That was the extent of Cole’s evaluation of his performance. This is incredible. The NFL reviews every single play of a game and assigns a grade to the officials based on the number of correct and incorrect calls made.

If an official receives a number of failing grades, he is put on notice. No such scrutiny exists in boxing.

“Someone like Van Hoy, he’ll be back in a couple weeks judging another show,” Malignaggi said. “He doesn’t get fined, nothing.”

Without a national commission to police the sport, boxing is subject to the whims of the commissions of each state. The Texas commission didn’t assign one neutral official for Diaz-Malignaggi, stacking the deck against the kid from Bensonhurst.

And the result? You get an uncomfortable decision for the hometown kid and the sport of boxing is the night’s biggest loser.

Actually, given the abundance of nefarious types with shady dealings, it’s a minor miracle that boxing isn’t even more corrupt.

Right now, in the vacuum created by the absence of a real commission, the promoters are the only ones with the money and power to run the day-to-day operations of the sport…and the asking price, in return, is that their investments be protected.

Honestly, I’d rather have Fredo Corleone in charge.