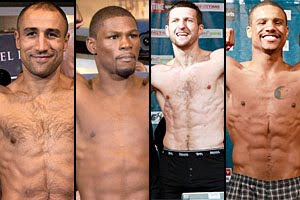 WBC Super middleweight beltholder Carl ‘The Cobra’ Froch and his American challenger Andre ‘The Matrix’ Dirrell both weighed in at 167½ pounds yesterday in front of a massive crowd of 3,500 people at the famed Market Square in Nottingham, England. Dirrell (18-0, 13 KOs) made weight on his second attempt, having weighed in earlier in the evening at 168.4 lbs. He had up to two hours to make the official weight for the title fight, but only took 50 minutes to return to the scales at 167½.

Froch (25-0, 20 KOs), a Nottingham native, will attempt to defend his title on home turf at the Trent FM Arena, where a sell-out crowd of about 8,000 fans is expected. The other two super middleweights will fight in front of another sell-out crowd of more than 14,000 fans at the O2 World Arena in Berlin, Germany, Abraham’s adopted hometown, on Saturday, Oct. 17.

The 12-round bout is one half of the first stage of the Super Six World Boxing Classic, and will be broadcasted live on Showtime.