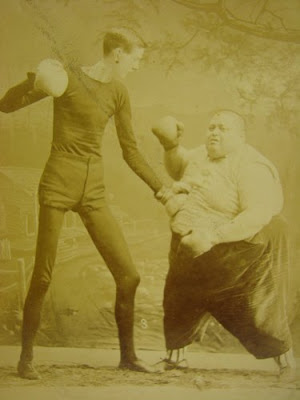 If you’re an ant, you can’t tackle a mountain. Common sense points to the big man, and most of the time the big man prevails, but bigger isn’t always better. Perhaps you have already been reminded by an uncle who remembers when Bob Foster, the great light heavyweight, met the much heavier Joe Frazier and was nearly drilled into the canvas. But what’s forgotten is that the little guys win some of these matches.

For those historians, 160 pound Bob Fitzsimons regularly fought men much larger than him. He only needed two rounds to kayo 260 pound Ed Dunkhorst. When he eventually lost his heavyweight title to James Jeffries, many felt it was because he had a 40-pound disadvantage. Jeffries was incredibly resilient which allowed him to outlast the smaller guy.

Before I bore you to death with a history lesson, some names like Henry Armstrong and Joe Walcott spring to mind as a smaller guy achieving at a higher weight. The modern craze of lighter-weight fighters moving up to heavyweight was started by Michael Spinks when he became the first light heavyweight champion to successfully challenge for the heavyweight title, when he knocked out Gerry Cooney who out-weighted him by more than 37 pounds. His success at heavyweight prompted a lot of lighter-weight fighters to try to duplicate his feat, not always with the most aesthetically pleasing results, for example James Toney. One fight that will live in the memory of every boxing fan is Roy Jones Jr.’s piss-take over John Ruiz to become the first middleweight champion to win a heavyweight belt.

Tomasz Adamek is a two-weight world champion who was considered top of the tree at 200 pounds before announcing his move up to the big guys. That accolade, and his Polish background, has earned him a strong following in his adopted American state New Jersey.

He will face fellow countryman and four-time heavyweight title challenger Andrew Golota in Poland this Saturday. It’s got the same kind of feeling as Tua-Cameron, and is dubbed as Poland’s Fight Of The Century. It will by far be Adamek’s biggest payday and by giving away a 30 pound advantage to Golota, it has sparked another size debate.

It’s hard to predict big man vs. small man, but Adamek is tough and resilient and will be facing a post-prime 50 week lay-off Andrew Golota. If you’re not interested in the fight, you’ll still be curious to see if the ant can once again tackle a mountain.