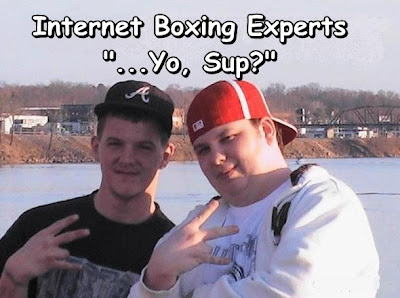 Boxing Tribune Editor in Jefe ,Paul’s, been bugging me for a column ever since someone had the bright idea to send him a Magic Jack long distance phone thingy. Now I get odd calls at odd hours with odd requests for stories. Today I decided to crank something out because I had a moment of clarity this past Sunday.

I was checking out the BTBC’s new board and ran across an internet radio show called The Boxing Truth on the new forum’s main page. I guess The BTBC and this show have some sort of relationship, I don’t know or care. But, Paulie, if you’re reading this and not just running it blindly through a spell check, you may want to reconsider.

I tuned in early to catch some white rapper verbally raping Floyd Mayweather, Jr. during an interview at a hip hop station. The confrontation between an Everlast replacement in a House of Pain reunion and a bumbling Mayweather was like every internet argument concerning Mayweather- dumb Mayweather haters and goofy Mayweather lovers. It was like the typical garbage you’d find at most other boxing forums, brought to life through the magic of the internet.

The accompanying chat room was not any better. It was filled with the typical crew: Internet tough guys, wanabe experts and lonely, lonely men who occupy mothers’ basements all across the nation and/or world.

I thanked god when the show finally began…until the hosts started talking. They were just like the rest of the morons in the chat room! Maybe a couple of years older, maybe a half-step up the cerebral food chain, but they were clearly cut from the same deficient fabric as the morons hurling mother jokes at one another in the chat. If you’ve never heard The Boxing Truth, imagine if HBO Boxing were hosted by Max Kellerman, but when Kellerman was trying to make it big as a rapper. Yo, sup?

Ok, so here’s the point of this rant:

Everything sucks in boxing right now.

We have boxers who really don’t know how to box; Fighters who work their way inside and just fall into a sweaty embrace because they really don’t know what to do. Or, look at Wladimir Klitschko, who is keeping an entire division in check by just sticking his arm straight out.

“Duh…He’s got his arm out…Now what do I do? I know. I’ll run face-first into his outstretched glove…Duh.”

The sanctioning bodies are stealing from the fighters and the promoters are squeezing every single cent from the consumer and, in the process, draining the sport of its very life; Trainers don’t train anymore and, at this point, there are more champions who don’t speak English than those who do.

The sport is in terrible shape and the only ones who can possibly turn things around are the fans…but the fans are complete and total morons. 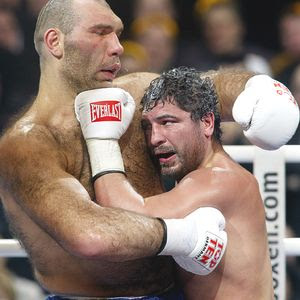 Just look at the human driftwood that occupied the chat room of the Boxing Truth radio show as they went on and on about the helpful topic of who is gayer and who did what to the other guy’s mother. Look on the message boards of places like Boxingscene and Maxboxing. Look at the upstart websites that are springing up everywhere, complete with massive typos and wonderfully insightful headlines like, “Is Mayweather Gay?” or “Jermane [sic] Taylor gets Knocked the F*ck Out!”

This is the fan base of boxing right now…second in stupidity to only the UFC in the sporting community. This is what happens when we continue to let the sport get marginalized and allow it to get pushed to the side.

In the movie, One Flew Over the Cuckoo’s Nest, Jack Nicholson’s character works his way out of a prison sentence and gets put into an insane asylum. He proceeds to turn the place upside down, eventually leading to chaos for the other patients and to his own eventual demise.

Well, the boxing promoters fit the Nicholson character perfectly, fostering ignorance among the fans and dumbing down the sport’s base so that they can be sold a bag of turds that they don’t even realize they’re buying.

The fans fight amongst themselves, the fighters start acting like the fans and even the journalists adopt the same stupidity.

I’m about ready to play the role of the big Native American mental patient in the movie and smother a lobotomized Nicholson before tossing a big hunk of equipment through a window and getting out of this asylum…and that’s a Boxing Truth, boyeeeeee!