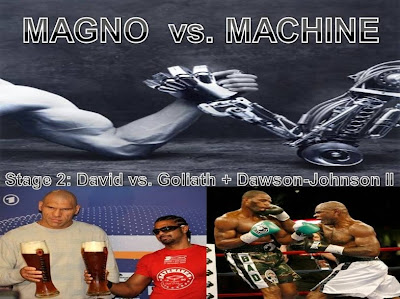 With Magno trying to emulate American folk legend John Henry, he could edge into a lead next week with the super bout between Manny Pacquiao and Miguel Cotto.

Nikolay Valuev vs. David Haye: With an impressive performance for someone with one hand, David Haye squeezed out a majority decision in Germany of all place, to win the WBA heavyweight belt and to become the first Brit since Lennox Lewis in 2003 to hold an alphabet trinket at the big guys.

Chad Dawson vs. Glen Johnson: With another perfect execution of the real sweet science, Chad Dawson showed America his full repertois of boxing skills by defeating Glen Johnson via unanimous decision in an uncompetitive bout. As you can see below the outcome was pretty predictable.