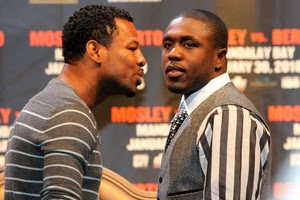 After bitching about him on twitter, Andre Berto has landed the fight he’s been chasing for the past year, but is Shane Mosley a step too big for the undefeated welterweight?

Back in January 2009, both men were victorious with Mosley smashing Antonio Margarito, and Berto defeating Luis Collazo. So why has it taken a year to negotiate this fight?

When Margarito-Mosley was in danger because of money matters, Mosley turned to Berto, who was being pushed hard by HBO over the last year. The fight was good to go, but Margaito realised that he had over-priced himself, and agreed to fight Mosley. Berto fought his mandatory challenger Collazo and a fight with Mosley was set in the Summer.

Berto survived his first gut check in his relatively young career, while Mosley was probably on a career high win. And over 11 months, Mosley has tried and failed to land a fight with Floyd Mayweather Jr. and Manny Pacquiao, as they both went in other directions. He spent most of the year verbally calling out the pair, but Berto’s name was never mentioned. Berto hasn’t verbally called Mosley out, just posting abuse on Twitter.

He finally steps back into the ring at the grand old age of 38 on January 30, 2010, to face Andre Berto in a welterweight unification fight that will prove how much Mosley has left and if Berto is world class material?

Berto made brick-built Colombian 140-pound IBF titlist Juan Urango look immobile in May, a fight so uneventful it’s been nearly forgotten already on the sheets of both men. It wasn’t the sort of performance the crowd craved from Andre, and Urango simply went back to light welterweight and fought in wild slugfest with Randall Bailey. Can Berto turn on the heat against Mosley?

Both fighters are fast, agile, and strong. Mosley has fought at this level for so many years, and Berto has hardly looked unbeatable in his previous two fights. I know it’s way too early to start making predictions, but this is a fight that has got my attention already. If Mosley pulls this one off, he continues his hall of fame career with another fantastic win. If Berto pulls what will be an upset over the veteran, a new star could be born. This is the fight HBO have groomed Berto for, and it’s time for him to show what he’s got on a new level.

Would Berto’s bitching bite him in the arse come January? Mosley is still an elite fighter, and disrespecting fighters at this level shows how desperate you are. Mosley learned after Mayweather defeated Marquez that disrespecting world class fighters gets you nowhere. Will Mosley punish Berto for his childish spites?

Berto has made this fight a mouth watering clash to kick off 2010!