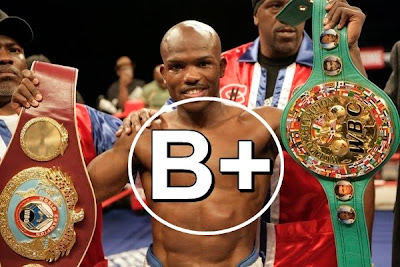 In an ideal world, there would be only one champion per division, but, unfortunately, boxing in the year 2009 is not ideal by any stretch of the imagination. For that reason, we’ve begun a new feature on The Boxing Tribune.

We’ll be grading all the reigning and recognized world champions, division by division, to come up with a clear idea of which titlists are making the grade.

Hopefully, this will give the fans a clearer idea of who are the “real” champions and who are just simply belt holders.

Our first subject is Timothy Bradley and the Jr. Welterweight division.

Current Title: WBO Jr. Welterweight Title
Other Titles Held: WBC Jr. Welterweight Title (Vacated)
BTBC Ranking: #1 at Jr. Welterweight
How He Earned His Title: Beat reigning WBO champ, Kendall Holt in title unification bout; Beat Junior Witter for the WBC title
Defenses: Edner Cherry (UD 12), Kendall Holt (UD 12), Nate Campbell (NC 3)
Next Defense: Mandatory, Lamont Peterson (12/12/09)
Down the Line: Rematch with Nate Campbell; Unification against Juan Urango; The winner of Diaz/Malignaggi II
Comments: Bradley has shown the courage and work ethic of a real world champion. He was willing to take on Jose Luis Castillo in Mexico for an eliminator (Castillo couldn’t make weight); He took the WBC crown from Brit, Witter in the UK; When left to his own devices , he chose a tough unification bout with Holt and a dangerous encounter with the crafty “Galaxxy Warrior.”

Although lacking in power and in some of the finer points of technical proficiency, Bradley has embodied the risk-taking attitude of a champion yearning to be the recognized champ in his division. His short reign, so far, keeps him from a higher grade, but he’s definitely on the right track.