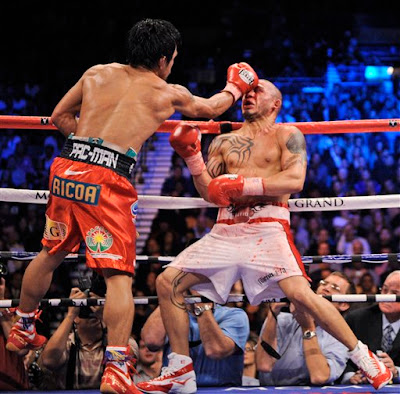 Sometimes I sit back in my fortified bunker and just go from website to website, reading all the absolute crap that somehow finds a home onto the vast, barren information super highway called the internet. Sometimes I’m amused…sometimes downright red-assed.

The latest garbage involves Miguel Cotto and his performance against Manny Pacquiao this past Saturday. I’ve seen the words “brave,” “heroic,” “classy” thrown around to describe his effort. But wouldn’t it be nice if we told the truth just this one time? Replace those adjectives with real descriptions of what we just saw from Cotto: “cowardly,” “weak-willed,” “yellow.”

Listen, before I start taking flack for calling any fighter a coward when they are surely braver than some fat slob behind a keyboard, let me just remind you that these are guys that are making their living as professional warriors. They’ve put themselves up there to be judged, analyzed and critiqued as a breed apart from the average man.

Cotto’s performance on Saturday was reminiscent of my performance back in ’87 when a chain-wielding member of the Sacramento branch of the Hell’s Angels chased me around a VFW parking lot for a good thirty minutes while I ducked behind cars and yelped like a lady.

And, like Cotto, I eventually succumbed and took my ass beating…but without a 10 million dollar check waiting for me and sans several thousand apologists calling my flat-out chicken-defense “heroic.”

Cotto, as soon as he felt the pressure, began to run. He ran more than any runner has been accused of running in boxing. Cotto’s sprinting went beyond defense. His “Fight or Flight” instinct went off and he decided to run…run…run.

There were times when I felt like I was watching Mel Gibson’s Apocalypto instead of a PPV main event, billed to be the fight of the year.

Even the usually even-tempered Pacquiao was finding Cotto’s pugilistic track meet to be distasteful as he openly showed his frustration at Cotto’s unwillingness to actually fight in the second half of the bout.

And this isn’t the first time that Cotto has put in such a limp-wristed performance. Against Mosley, he began to run at the end when Mosley started coming on strong; Against Margarito, he sprinted from corner to corner, like he was looking for a place to hide inside the ropes; Even against Clottey, when the going got tough, Cotto got the urge to be the Puerto Rican Jesse Owens.

So, let’s call a spade a spade. Cotto’s a great front-runner; Awesomely brave when he’s beating up an inferior opponent. But when the chips are down and he needs to pull out a big win against an unrelenting foe, he’d much rather be doing road work.