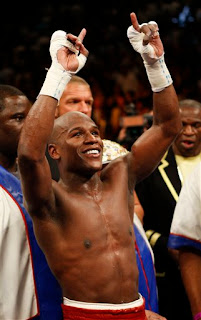 In an apparent softening of position, Team Mayweather has issued somewhat of an olive branch to Top Rank and is willing to negotiate terms for a Mayweather-Manny Pacquiao bout in 2010. The negotiations will take place through a third party, Richard Schaefer of Golden Boy, but they still represent the first time that any serious negotiations will take place between Mayweather and Top Rank since Mayweather left the promotional company several years ago in a bitter and messy split.

Mayweather advisor, Leonard Ellerbe, summed up the general opinion of the entire boxing world when contacted for comment, “It’s no secret the camps don’t see eye to eye, but this is bigger than boxing. We understand the magnitude of this.”

Ellerbe went on to say that if the Pacquiao fight can’t get made, their next option is Shane Mosley, if he gets past Andre Berto in January.