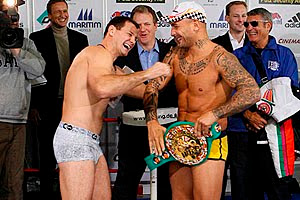 Fragomeni will hold a significant advantage in weight over the talented Erdei, but it doesn’t necessarily mean that the Italian will bully the challenger around. Erdei is the younger of the two and has more ability than the champion.

The Italian is as tough as fighters get, coming off the canvas to draw with Krzysztof Wlodarczyk. With Erdei weighing in so low, possibly as he’ll go back to light-heavyweight after this fight, it makes a compelling contest for us fight fans tonight. The fight is on at 4:15 Central US Time.