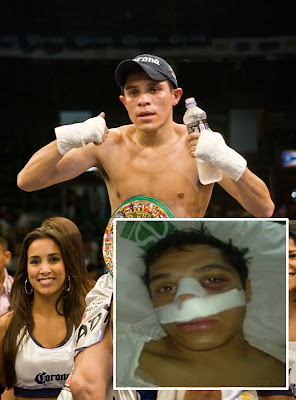 Although the WBC failed to officially acknowledge Edgar Sosa’s protest of his loss to Rodel Mayol last Saturday, the organization did agree to name him Emeritus Champion based on his solid reputation as champion and the hint of some confusion in the initial in-ring decision.

A fierce headbutt from Mayol on Saturday dropped and clearly hurt the defending WBC Jr. Flyweight champion, Sosa. The butt was initially ruled as accidental by the referee, but later ruled intentional by members of the sanctioning body. Whether intentional or not, Mayol seized the opportunity and stopped Sosa seconds later.

The designation of Emeritus Champion means that Sosa, after he recovers from his injuries, can immediately demand a rematch for the title without having to wait in line. Sosa will also have the opportunity to challenge for the Flyweight title, under the same conditions, if he wishes.

Sosa is currently recovering from surgery which required him to have two titanium plates screwed into his face due to a triple fracture of the cheekbone that affected his cheek, nose and the orbit of his eye. He’s expected to be out of commission for at least 6 months.