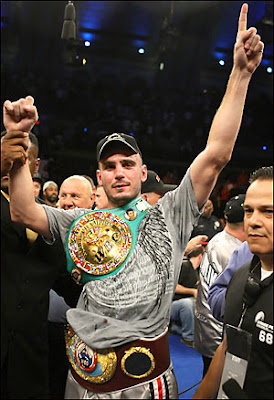 According to industry sources, HBO is pushing for a fight between super middleweight titlist Lucian Bute and middleweight champion Kelly Pavlik in 2010. Bute knocked out Librado Andrade in the fourth round last night in Quebec City, while Pavlik is set to fight lightly-regarded Miguel Espino on December 19 on Top Rank pay-per-view.

Bute (25-0, 20 KO) and Pavlik (35-1, 31 KO) may well find themselves without any other attractive options, though I’d expect that negotiations could be tough. Bute may be loathe to leave Quebec, where his fights sell out big arenas and make a lot of money. Pavlik has travelled well to Atlantic City for past fights, and would surely object to yielding a home field advantage to Bute, given that Bute has a large audience in Quebec. The money split, the location, the promoters working together, all of that could be a chore.

I also think Pavlik will still want to get in the ring with Paul Williams first, should Williams win on December 5 against Sergio Martinez. Pavlik says he’s not ducking Williams, but the only way to prove that for sure is to fight him. They’ve already had a deal worked out, only for Pavlik to pull out of two dates.

If Pavlik were, in theory, to fight Williams after Espino and win both bouts, then it would almost surely be time to fight Bute. The middleweight money fights simply aren’t there. The other titlist Felix Sturm and Sebastian Sylvester, are small names in America and it doesn’t appear Sturm is in any rush to leave Germany, where Pavlik would surely not head for a fight.

At the end of it all, Bute-Pavlik just might make the most sense, and if semi-promoter HBO pushes hard enough, it could surely happen. It could also be a terrific fight, much more competitive than Williams-Pavlik. Bute has developed into a fantastic fighter, and Pavlik has stagnated. Then again, a fight with Bute could be just what Pavlik needs to get his groove back.

But does Pavlik deserve another payday? If he doesn’t fight Williams, who must have had enough of Pavlik by now, I don’t think Bute should award him a fight. It benefits Bute financially and it would be a good name on his CV, but if the fight with Williams or Bute doesn’t happen, Pavlik will struggle to find a competitive fight for the fans.

Has Thomas Hauser’s rant at HBO changed the way they set out to matchmake? HBO are carefully choosing fan-friendly fights, which must boost the broadcast popularity. If they can find a good fight for Dawson, HBO might overtake Showtime as the fan-friendly broadcasting team, as Showtime’s Super Six has supposedly changed the face of boxing.

To be honest, it already has. Not in a way that more tournaments will be scheduled, but HBO now consider Showtime to be major competitors. With the opportunity of losing a massive market share to Showtime too much to bear, the big bosses at Home Box have realised that you don’t need a blown-up legend to sell a fight, only a competitive mouth-watering fight.