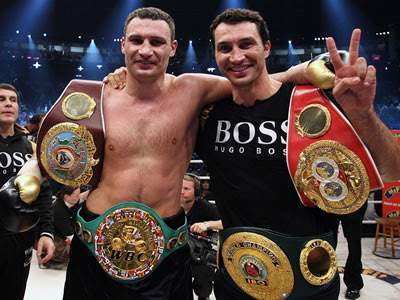 by Dafs117
At the top of the pile (because that’s what they are, a pile of crap), remains the unique two man monster, brothers to be more exact, Wladmir and Vitali Klitschko. They are double champions. Neither one has shown that they’re ‘The Man’ at the top. This is the theory. Beat one Klitschko and you’re in the top two. Beat both Klitschko’s and you’re ‘The Man.’ Sounds like an ending to a fantasy game, doesn’t it?

Nobody knows if the brothers are good for boxing. They’re gentleman, icons and great sportsmen. But a champion won’t be crowned unless they get defeated or retire (together at the top sounds like the beginning to the fantasy game). Is there anybody good enough to beat a brother? Nobody screams out DANGER to all heavyweights like a 5 fight Mike Tyson did. One thing that’s really bugging me about their fights are people classing them as ‘boring.’ I don’t mind defensive sweet science, but if you can take him out of that ring, please do. It’s just too one-sided. Like Vitali said after his pummelling of Chris Arreola, “Boxing isn’t about proving you have a hard head.” True Vitali.

Since they will NEVER fight each other, no matter how many times ignorant reporter’s will ask them that same bloody question they’ve been fending and ducking for a decade, unless they are short of cash, they would turn to each other in a mega mainstream bout that would make them filthy rich. I wonder if Big Mama Klitschko will be ringside? Who will fill the void at the end of the Klitschko era?

The current hopes of breaking the Ukrainians’ stranglehold at the peak is former undisputed cruiserweight champion David Haye, a mouthy Brit that’s uniquely charismatic for a big guy, has a massive punch output, is fast and exciting. He has given the division the kiss of life with his mouth, not his fists, which is pretty impressive. Maybe he got the big fights because he has a personality, and isn’t the same old robotic contender that usually fits the Klitschko criteria. Can he avoid those jabs and right hands for 12 rounds, and then pluck up the courage to land something powerful in return? Let’s leave that for another series of Magno vs. Machine. If Haye breaks down, Alexander Povetkin (yes another Ukrainian), is just like Haye, has a massive punch output, is fast, exciting and a MASSIVE underdog against a Klitschko.

This year, following a big push from HBO (it must have been one heck of a push), Chris Arreola’s wobbly figure was not good enough as his hopes of coming the first Mexican-American world heavyweight champion were laughed at by the older brother Vitali. We still haven’t seen the kayo artist in the ring with someone his level, maybe Chazz Witherspoon counts, but we all know what happened there.

Ruslan Chagaev, the highest ranked non-Klitschko at the time, fitted the required bill that Haye and Povetkin fits, has a massive punch output, is fast, exciting and a MASSIVE underdog against a Klitschko. After pulling another trick on Nikolay Valuev, he received a big payday, and an even bigger task of beating Wladmir, the more elusive fighter of the two at the top. He was too small and was jabbed until his corner had seen enough. Punishment not jabs.

Kevin Johnson, the fast-talking American newcomer , had the same curriculum vitae that Haye, Povetkin and Chagaev possessed, a massive punch output, is fast, exciting and a MASSIVE underdog against a Klitschko. I think you’re beginning to understand the trend.

Eddie Chambers, the highest ranked American, is due to fight Wladmir on March 20, and yes you guessed it he has a massive punch output, is fast, exciting and a MASSIVE underdog against a Klitschko. Can somebody be brave enough to predict the outcome?

This might sound funny, it will sound funny, but Nikolay Valuev might have been the guy to knock a Klitschko off the top of the tree. His performance against Haye might have suggested otherwise. He’s a tall eastern European that fights in Germany. Doesn’t it sound familiar?

Alexander Dimitrenko might have had the style but not the mentality to beat a Klitschko. He’s tall, an eastern European that fights in Germany. Again, sound familiar? This is getting catchy. Denis Boystov might be the guy to look out for after he destroyed his former sparring partner and gym ‘friend’ Taras Bidenko, in one of the most brutal performances in the division this year. He has a massive punch output, is fast, exciting and a MASSIVE underdog against a Klitschko and an eastern European. The trends can combine? They say you learn something new every day.

From the clutter rose David Tua, who made a comeback after two years out against ‘Mountain Goat’ Shane Cameron in a knockout of the year contender. Odlanier Solis is still unbeaten and so is Tyson Fury (somehow). Audley Harrison, is still demanding respect, and WILL get his dream title shot….. when he beats a worthy contender. Digging deeper into the clutter, Shannon Briggs made another comeback (zzzzz) I’m starting to lose readers here, Oleg Maskaev, Hasim Rachman, Lamon Brewster and even Commander Evander Holyfield (who changed his nickname to Lean Green Fighting Machine) won’t GO AWAY. Get real, or get out.

To finish on a high, John Ruiz has only fought once in 16 months. Hallelujah.

Summary: After a determined David Haye pushed the date back to May 20, Klitschko was angered when the Brit pulled out with a back injury as Dr. Steelhammer felt that he could have fought in March as well. Completely dominant over high ranked stand-in Chagaev, but nothing that we haven’t seen before from the Ukranian.

Summary: Vitali busier than his brother showed no signs of fragility during his schooling of Gomez, Arreola and Johnson. Age might be catching up with him, and it will be interesting to see how he adapts his game to his older body. An easy fight against the winner of blood-pumping Aguilera-Austin next.

Summary: It’s the old cliché of one step forward, two steps back for Povetkin, who endured the best year of his career in 2008, suddenly screech to a standstill in 2009 with two B class fighters. Estrada is decent we all know that, but Povetkin should be looking at #10-#15 to improve his stock, not #30-#35.

Summary: The complete opposite to Povetkin. After getting defeated by Povetkin in 2008, Chambers bounced right back into the field of play with two impressive wins against hammer punching Peter and the perfect sparring partner Dimitrenko. Big test against Klitschko to come in 2010.

Summary: Chagaev is the most frustrating of champions. Not in the ring, but outside, nailing a fight with the Uzbeki is near impossible. He failed a medical against Valuev after discovering a case of Hepatitis B, stepped-in for a payday and a beating against Wladmir, which probably ended his run as top level contender. Expect a slow return in 2010.

Summary: Haye did what every fight fan wanted him to do, take Valuev out of the picture. Valuev was already out of the picture on TV cameras, but now retirement beckons for the loveable oaf. He is the man that everybody’s counting on. Can he step up to the mark in 2010?

Summary: Some might be surprised with Boystov’s inclusion in front of Arreola, but Boystov was a beast in beating Bidenko by brutal kayo, and in my humble opinion, is better than a battering of Brian Minto with a defeat to Vitali to balance. The fan-friendly 23 year old face a busy 2010, out-classing tomato cans in his native Hamburg. B-b-brilliant!

Summary: Was f***** by Klitschko in a f****** one-sided display on HBO, who give Arreola another chance to show his lack of talent. His figure is deceptive, but the jiggly American is not the most eye-friendly treatment fans want. The constant F-bombing and physique jokes are cringeworthy, but somehow he remains a force to be reckoned with.

Summary: The mammoth Valuev was made to look silly by the quicker, more accurate Haye. Haye’s tap-dance was the key to victory, and probably put the final nail in Valuev’s heavyweight coffin.

Summary: Ruiz stepped aside to allow himself to get a bigger pay-check, and a bigger beating. A Haye fight sees him earning a seven figure salary to his pension fund, with Serin proving that Ruiz hasn’t got much left in the tank. An annihilation is in place by Haye.