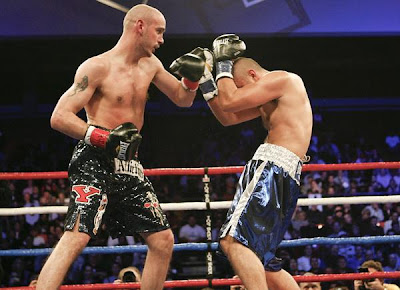 Miguel Espino (2o-3-1, 9 KOs) showed up at the Beeghly Center in Youngstown, Ohio ready to go to war. Unfortunately, he was severely outgunned by reigning WBO and WBC middleweight champ, Kelly Pavlik (36-1, 32 KOs).

The fight itself was of the phone booth variety as both Pavlik and Espino traded shots on the inside. Pavlik scored the heavier blows to the body and head, but Espino, to his credit, kept firing back, even marking up the hometown fighter’s face with sloppy, but scoring counters.

Referee Steve Smoger deducted a point from Espino in the first round for punching after the bell and warned him for low blows on several occasions as the battle started to heat up and Espino’s punches started drifting down below the belt line.

In the fourth, Pavlik scored two wicked uppercuts that forced Espino to take a knee, but the challenger was able to survive. At the 1:44 mark of the fifth, however, Espino went down again and, this time, his corner waved off the fight.

The post fight interview was highlighted by Pavlik’s mocking of Paul Williams’ status as “Most Feared Man in Boxing” and by promoter Bob Arum’s offer to make the Williams fight Pavlik’s first priority in 2010.

The cheers were loud in Pavlik’s hometown of Youngstown, but the question remains whether his performance tonight, at a poorly-received pay per view against very limited opposition, has done anything to regain some of the fans who left his side after the Williams debacle.

Boxing fans will forgive a lot of things, but the perception of cowardice is one of the unforgivable sins of the sport, especially for a fighter who has based his popularity on his hardcore, blue-collar status.

Pavlik’s and Arum’s post-fight words were strong and convincing, but they were probably just preaching to the choir. The fans they really needed to reach were simply not watching.

Other results from the split-venue PPV: