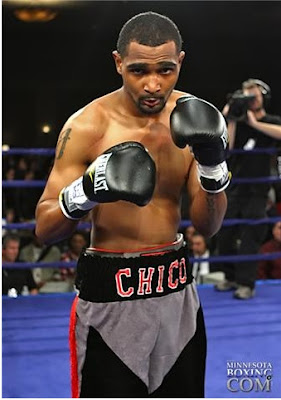 With an amateur record of 98-16 and a fast growing reputation as the hottest prospect in Minnesota and one of the elite prospects in all the United States, an 18 year old Javontae Starks faced his toughest battle when he was  shot during a conflict at a graduation party.

The gunshot wound to his thigh, which nicked a major artery, nearly caused him to bleed to death and was seen by many as the death blow to his career. Doctors doubted whether Javontae would ever even have full use of his left leg again.

Fast forward to 2010 as a 20-year old Javontae prepares for his third professional fight and has put together an impressive record of 2-0 with 2 KOs.

The story of Javontae Starks is a true-life Rocky story with his very existence among the professional ranks being a testament to the hard work and dedication of a young man truly determined to pursue his dream.

Javontae was gracious enough to take a few moments from training to talk with The Boxing Tribune:


The Boxing Tribune: Thanks Javontae, for taking the time to talk to our readers…

First, Tell us briefly about the injury you suffered back in 2007. It was no sure thing that you would even survive the shooting…

Javontae Starks: It was a bullet wound that hit my thigh, and nicked the same artery that killed Sean Taylor, the football player. It was in the upper thigh, it missed my hip by a couple centimeters, and hit my sciatic nerve.

BT: A lot of medical people doubted if you would ever fight again. At that point you were a highly-regarded amateur with a bright future…What went through your mind when you were told that?

JS: How much hard work I’d have to put in. At first I was upset, angry at the situation asking, “Why me?” God works in mysterious ways, and brought me to where I am after the fact.


BT: From looking at some of your fights, you always seemed to have a style more suited to the professional ranks…For those who haven’t seen you fight yet, which fighter would you say you most resemble?

JS: I would say Gerald McClellan, alot of people don’t know him, he’s from Illinois. He was a super middleweight, he fought Nigel Benn and suffered a career ending injury. I’m definitely a boxer-puncher, alot of people say my game was a little slow for the amateurs but it fits the pros real well.

BT: Some background info for the readers of The Boxing Tribune:

JS: I always go into the corner and pray, I say the same prayer everytime. I always show love to my uncle. If I could have one guy around to watch me fight, it’d be him. I also show love to Diego Corrales, thats my favorite fighter. I wear the “Chico” on my trunks, thats a guy I pay respect too.


BT: Who are your favorite active fighters?

JS: I like Lamont and Anthony Peterson. Gary Russell is nice. I’m a big fan of Andre Dirrell, I met him and he’s a real cool dude.

JS: Castillo and Diego. The one where Diego went down twice and Diego got up and stopped him.


BT: Best piece of advice a trainer has ever given you?

BT: When’s your next fight?

Thanks for taking the time to talk with us…We’ll keep this brief, but I hope this is the first in a series of talks as you climb through the ranks…Good Luck!

Starks’ bout will serve as a co-feature to Minnesota middleweight champion Andy Kolle’s return against Pat Coleman. “Friday Night Fights at First Avenue” will be an 18+ event. Tickets are priced 25$, 35$, and 100$ and are available at www.first-avenue.com/event/4478/friday-night-fights-first-avenue