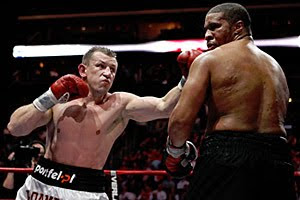 Ready or not, you can’t really complain about Tomasz Adamek (40-1, 27 KO) most recent decision to fight against Chris Arreola in April. Based on Adamek’s performance tonight, it should be a thriller, a back-and-forth tug of war, finally (for Adamek) on American TV.

The two-weight world champion continued his rise to contender status as he won a hard-fought decision win over Jason Estrada (16-3, 4 KO) in front of a noisy crowd predominantly Adamek fans in Newark.

Adamek opened-up a wide lead in the first half of the bout, quickly underlining the vast difference in class by dominating Estrada’s soft body. The early rounds were fairly even, but as the fight progressed, Adamek’s dominance was quite clearly visible.

But that’s not the full story. Suddenly, Adamek ran out of steam at the end of the ninth allowing Estrada to creep back into the fight, reminding me of Carlos Tamara’s upset win over Brian Viloria two weeks ago.

It wasn’t to be for Estrada, but it did ring a few bells in Adamek’s camp. Estrada clean sweeped the final three rounds to make the scorecards seem competitive, and rightly so as he definitely was no pushover in the early rounds.

Adamek’s struggle makes Arreola favourite for me, although he did have the characteristics of a lower-weight fighter, feinting and moving, something clearly lacking from the heavyweight scene.

On the undercard, Peter Quillin (21-0, 15 KO) dominated Fernando Zuinga (28-10, 20 KO) to a wide ten-round unanimous decision. It doesn’t portray the full story as Quillin was regularly caught napping by the experienced veteran as Zuinga constantly scored with right hands throughout the fight. Quillin lacked the fundamentals, but ring rust can be blamed as this was his first fight in 17 months.