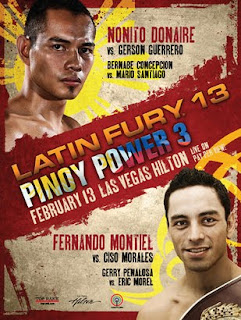 I don’t know why, but every review seems to start with the main event. But not this one. I’ll start with the most meaningful and competitive fight, then the controversial one, finishing with a brief account of how Donaire and Montiel’s public sparring sessions went.

Bernabe Concepcion UD 10 Mario Santiago
In an unofficial eliminator to face WBO titlist Juan Manuel Lopez in the Summer, Bernabe Concepcion (30-2-1, 17 KO) won a too-wide decision over Mario Santiago (21-2-1, 14 KO) in the best fight of the night by far. The scores seemed wider than they should have been, but the judges had given it to the right fighter. Santiago gave it his all, but for me, he only won 5 rounds at most and Concepcion scored a knockdown. Santiago rallied late on but it wasn’t enough, as Concepcion won by scores of 98-91, 96-93, 97-92. The BTBC scored it 96-93 Concepcion. It’s a big win for Concepcion, who gets a once in a career opportunity against an icon in Juan Manuel Lopez. Lopez is the obvious favourite, but the unpredictable Concepcion is a live underdog.

In a WBO bantamweight elimination fight, Eric Morel (42-2, 21 KO) shoplifted a split decision from veteran contender Gerry Penalosa (54-8, 34 KO). Two unintentional headbutts in round six opened cuts over Penalosa’s eyes, but the 38 year-old Filipino upped his game down the stretch and had done more than enough to win on The BTBC card. By all accounts, it was a horrible decision. The judges scores were 115-113 and 116-112 to Morel, while one judge gave it to the right fighter, 115-113 Penalosa. The BTBC had it 116-112 to Penalosa, and it really could’ve been more. 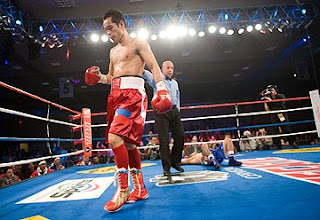 knocked out blown-up strawweight Manuel Vargas (26-5-1, 11 KO) in three rounds in one of the biggest headline mismatches in PPV history. Donaire towered over Vargas and floored him with a left uppercut in the third. Vargas, a late replacement, is not the calibre of opponent Donaire should be facing at this stage of his career. His original opponent, Gerson Guerrero, doesn’t fit the bill either.

Fernando Montiel KO 1 Ciso Morales
In another pointless fight, Fernando Montiel (40-2-2, 30 KO) continued his rise in the pound-4-pound stakes by creaming Ciso Morales (14-1, 8 KO) with a body shot in the opening round. The previously unbeaten Morales didn’t give much of a fight, failing to beat the referee’s count after Montiel landed a left hand to the body winded the challenger.